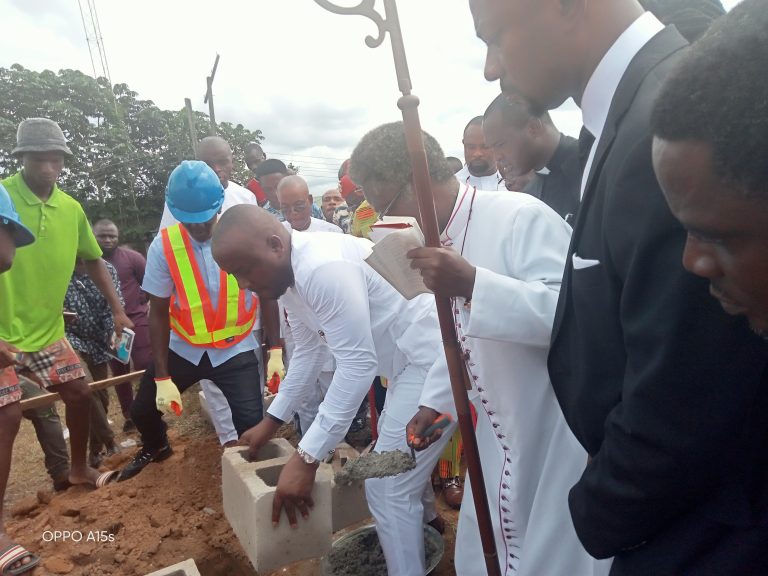 The Executive Chairman of Ikwere Local Government Area of Rivers State, Hon. Engr. Samuel Nwanosike (JP) has reiterated his commitments towards delivering dividends of democracy to his people, assuring that the promised erection of a place of worship in the Council would become a reality in a fraction of sixty days.

Hon. Nwanosike gave this charge today, at Ikwere LGA, Isiokpo, in Rivers State, during the flag off Foundation Laying ceremony of Ikwere LG Council’s Chapel, in commemoration of his 100 days in office.

Famousreporters.com recalls that Hon. Nwanosike was, elected into office on April 17, 2021, as the Executive Chairman of Ikwere, during the Rivers State Local Government election.

The Council Boss who boasted that the 1000-Capacity seater Chapel which his administration has begun its foundation laying, was in fulfilment of the promise which he alongside his team had made to the Almighty God at the inception.

The visionary Council Boss assured the staff and members of the Council that the edicfice would come to being in a fraction of two months, pointing out that the Council has made available recources needed for the speedy actualisation of same.

“When you make a promise to God and you know it’s just between you and God, if you’re a man of conscience and recognize that you were not aware of when and how you were formed in your mother’s womb, the dark walls of the womb, you don’t know who saw you through, you must make sure that you do everything within your power to see that the promise you made to God Almighty is fulfilled

“What we are about to do here was one of the promises my team and I made to God Almighty that if he gives us the opportunity to manage the resources of our people, knowing that we’re not the best among the thirteen Wards and almost 312 0 in Ikwere LGA we would build him a place of worship in this Council in order to establish his Divine presence. And today, that journey of a thousand miles is about to commence; all I will say like the Contractor is, that I give the Contractor sixty days.”

Responding, the Project Manager, Bassey Okpoyo Etim of Bazo Mega Resources Ltd, in an interview with newsmen pledged that massive Project would come to a completion in a sketch of 60-days.

Mr. Okpoyo explained that the edicfice comprised three different components, namely- the Auditorium, Chaplain’s office and a rest room, adding, “here, were are more of Christians than so it’s going to serve as a place of words to Christians.

Asked what magical powers he would deploy to redeem his pledge in a sketch of sixty (60) days, the Project Manager outlined factors that could help propel the unhesitant conclusion of the project, ranging from a clement weather condition and availability of funds.

Also, in his sermon at the foundation laying, Archbishop Blessing Enyindah, the Archbishop of Niger Delta Province and Bishop of Diocese of Ikwere, lauded Engr. Nwanosike for his landmark achievements, describing him as a Chairman with a difference, recounting on his unequivocal display of total commitment to serving the people from inception.

He said, “I’ve been opportuned and privileged by the invitation of my Chairman I call him. I know why I personalize it. Over the years, we have worked with chairmen but this chairman is different. He has shown the sanity, he has shown capacity, sacrifice, love and commitment to the people of Ikwere land. We want to thank him very much. Please, continue with what you are doing.

Drawing his sermon from the Gospel Book of Mathew chapter 27:7, the clergy informed that the Council Boss had created an environment for the staff and entire the people of Ikwere to hear the word of God.

“By what you are doing here today, you are creating an environment for the people of the local government that work here, and in fact, all the local government people to hear the word of God. You are also laying the foundation of your future, both for your family and your political career. And I want to assure you that we’re with you in prayers. Well, we don’t make statements but I want to assure you that if I am going to cast my vote, I know where to cast my vote”.

Highlights of the event which also featured the commissioning of 300kva Generating Set for the Council was a cultural display by Cultural group of Isiokpo, comprising elderly men and women, as they poured encomiums on the Council Boss.