The Peoples Democratic Party, Ebonyi State chapter, has petitioned the Chief Judge of the state, Justice Anselm Nwigwe, over alleged unlawful connivance and meddling by a staff of the court and others, to fraustrate its appeal. 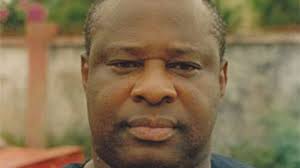 FamousReporters reports that the appeal came on the heels of preliminary issues bothering on jurisdiction raised by its Counsel, Chief KCO Njamanze (SAN), on December 21, 2020, which led the party to file a Notice of Appeal and motion for stay of proceeding, same day.

In the petition dated January 6, 2020 and titled, “Complaint of unlawful connivance and underhand activities to fraustrate our appeal in Suit No. HAB/161/2020; Chief Onyekachi Nwebonyi & 2 others V PDP & 11 others by Mr Ezinwa Ogudu, the Head, Appeal Department of High Court, a copy of which was obtained by FamousReporters on Thursday, the party alleged that Mr Ogudu has been scuttling its efforts to process and transmit the records to the Court of Appeal, in Enugu.

The PDP further alleged that since it transferred the necessary sum of money to Mr Ogudu, being payment for the processing and transmitting of the records, the HOD’s mobile lines had been switched-off, thus stifling all its genuine moves to transmit the records to the Appeal Court.

The petition reads, “This the Head, Appeal Department of Ebonyi High Court, Mr Ezinwa Ogudu issued Form 3 to the proposed respondents to appear for settlement of records on the 24th day of December, 2020. On the 24th December, 2020, the respondents were absent and the HOD Appeal asked that the appellant make payment for processing and transmitting the records. Upon the request of the HOD, we made deposit through one of our counsel, Mazi Micheal Igbo Esq.

“Following the further request of the HOD, we transferred the balance of the money for processing and transmitting record of Appeal through our Secretary, Barr Luke Nkwegu to the HOD on the 27th  day of December, 2020, with the assurance that the record would be transmited on the 29tj of December, 2020.

“To our surprise, however, on the 28th day of December, 2020, information began to filter in that Mr Roy Nweze, the elder brother to Ebonyi State Governor. And one of the counsels to the proposed respondents in the Appeal had boasted that they would frustrate our appeal and that nobody would process or transmit our records until they got interlocutory injunction.

“My Lord, the events that followed after the rumour have gone you confirm the authenticity of the rumour. Thus, ever since Mr Ezinwa Ogudu received the balance of the money for processing and transmitting the records, he has simply and dramatically turned to constitute a cog in the wheel of the process of transmitting the records. He has now abandoned the already processed records and switched off all his mobile lines”.

The petition, which was signed by the party Chairman in the state, Elder Fred Udogu, added, “Our Secretary complained to the Deputy Chief Registrar of the High Court on January 5, 2021 and before the DCR made several attempts to reach the Appeal HOD, to no avail as his numbers were switched off.

My Lord, it is pertinent to state here that the record of appeal in this matter is over ripped to be transmited to Court of Appeal, having fulfilled all the requirements and in view of the nature of the case involved. It is uncalled for and highly uncautionable for for staff of the judiciary to surrender himself as an instrument to be used to detail the cause of justice and deny us our right to explore remedies provided in the law within the time we need it.”

Speaking on the development, of the counsel to the defendants, Mazi Micheal Igbo, said the judiciary staff was acting unlawfully by failing to show up and conclude a legal assignment he started.

According to him, “This is the height of injustice and wickedness. This judiciary staff know why we need this record of appeal processed and transmitted to Court of Appeal, in Enugu; but he has chosen to obstruct the course of law and this undemocratic and against the rule of law.”

Also speaking, Secretary to the PDP in the state, Barr Luke Nkwegu, said it was travesty of the law for the HOD Appeal, Ogudu, to abscond after collecting money from the party and accepting to process and transmit the record of appeal, which  according to him, was within his jurisdiction of his office to do so.

Nkwegu said, “This is insult on our democracy. This is travesty of justice and law. This judiciary staff is acting in convince with the powers that be to shut us out of our appeal. The last time I called him and he picked, that was four days ago, he told me to shut up. No problem. But we fight with the last drop of out blood yo get justice.”

The Deputy Chief Registrar of the High Court, Mr Enyinnaya Obo, confirmed that his colleague’s phone number had not been reachable, adding that he had equally made frantic efforts to reach him, without success.

He said, “The PDP lawyers were here even yesterday and in your presence, I called Mr Ogudu severally, but his numbers were not reachable. However, there is no problem. I will continue to try and see how to reach him. We will resolve the matter.”

He was equally yet to respond to text messages sent to his mobiles on the matter, as of the time of filing this report.

2023: Rep Onuigbo Highlights What Ndi-Igbo Must Do

Ebonyi: Our ‘marriage’ with old PDP members, Not...