The Minister thanked the Kalus during a courtesy call on the President of ROW and mother of the Senator representating Abia North, Dr. Orji Uzor Kalu.

In his Speech, the minister while praying for Kalu’s mother aka. Odiukonamba for long life and health, expressed profound gratitude for her support to President Muhammadu Buhari and All Progressives Congress (APC) 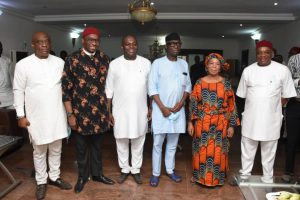 In his remarks,  Senator Kalu thanked the minister for the visit.  He recalled his friendship with Adebayo dates back years ago , adding that they became closer when they were governors in 1999. He extolled the ministers virtues revealing that he is one of the politicians he holds in very high esteem.

According to him,  ” President Buhari has done what other presidents refused to do. What all other presidents refuses to do for the Igbo people, Buhari is addressing those  issues. He is  a president that should be celebrated by us.  No  matter what anybody says , I believe in his works and I want everybody to believe in him .No leader is perfect, a leader might be good in this and be imperfect in the other one” He said . 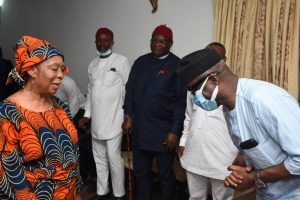 It will be recalled that the minister accompanied by his entourage had stormed Nkporo to attend the traditional marriage ceremony between Mr Olumide Adewumi and Glory Nnenna Onuoha in Etiti Ama Nkporo, Abia State

Vaccination efforts boosted, WHO to probe Covid origins in China

Ndi Ikwuano, I’m Grateful I shall not fail...

I Dedicate My Certificate To God, Ndi Ikwuano…...