Preface: This article attempts to correct the mindboggling lies and half truths canvassed by my brother journalist, and friend, Uche Nwosu in his opinion piece entitled: ‘Rep Sam Onuibo’s Betrayal: Ikwuano/Umuahia Must Avoid Accepting The Wrong Narrative’

Impunity and negation of the Rule of Law ranks high as some of the reasons the PDP lost the Presidency and power at the federal level in 2015. But sadly, some officials of the party appear to think they can still eat their cake and have it.

Ahead of 2023, it is certain PDP’s control of power in Abia will never remain the same even as the party’s acts of impunity are becoming nauseating even to its members.

It took the defection to APC of Rep Sam Onuigbo, member representing Ikwuano/Umuahia North/Umuahia Federal Constituency for Abia, nay PDP national to come to terms with the atrocities and tyrannical power play that Abia PDP is shrouded in.

That things will definitely never remain the same in Abia PDP underscores the significance of Onuigbo’s defection. Thus it is not surprising that those who stand to lose by this defection will embark on spreading spurious lies and half-truths to whitewash their image

Curiously, a senior journalist like Uche Nwosu has lent his brand to this futile exercise founded on lies and half-truths, and whose shameful failure is already predetermined. Nwosu cannot pretend that he is ignorant of the fact that the PDP congresses of early 2020 from the wards to the LG level produced two factions in Ikwuano LGA. He cannot pretend to be ignorant that the tussle became a court matter, which was referred back to the party, but key players in the party clearly refused to act thus allowing impunity to germinate and grow.

That a journalist of his standing, who knows this truth still went ahead to state that there were no crises in Abia PDP shows that the premise of his arguement was founded on lies. With the foundation of his work being lies it follows that the entire work will be built with lies. He did not disappoint in that regard.

If Nwosu was bent on uncovering the truth, it would have led him to former governor of the State, now Senator, T A Orji who said he advised Col Austin Akobundu, PDP National Organising Secretary, to resolve the crisis in his LGA, but Akobundu said it was too late. Granted also that within this same period, many persons reached out to both Senator Orji, the Abia State Governor, and the PDP National Chairman to address the impunity all to no avail.

The question at the heart of that crisis was whether to obey the party’s resolutions and policies or obey the emperor-like dictates of an individual. Onuigbo of course chose the former and stood his ground. Still he sought for ways to settle the matter and let justice reign. When it became clear that fairness and justice were not what the PDP wanted, Onuigbo had no choice but to leave the party — where individual whims and caprices overrides party resolutions and policies

Let me make it clear that while the PDP and people like Uche Nwosu would want the world to believe that the PDP did Onuigbo a favour by giving him the chance to become the first ranking member of the House of Representatives from Ikwuano/Umuahia Federal Constituency, this again is false. In fact, it is on record that all the key players from the impunity reign being foisted on Ikwuano people by the PDP opposed Onuigbo’s bid and worked against him at the primaries. These class of people range from the Speaker of the Abia State House of Assembly, through Col Austin Akobundu, even on to other minor players. That Onuigbo survived their coordinated attack was due to the grace of God and some smart politicking on his part. Which was why they decided to start early this time to implement a plan they drew up in 2017 but failed in its execution in 2018. Make no mistakes about it, the weeping you are hearing from the PDP camp, which has led to the concoction of lies which Uche Nwosu stooped low to propagate is borne from the sense of disappointment in their camp that Onuigbo refused to be a slave and rather choose to stand firm as a man. Records show that for these people, enslaving people so that they will rejoice when they hand them crumbs is their sole tactic. That is why Abia is where it is now— the worst state in the country and administered as the estate of an individual

From all intents and purposes, Nwosu was simply sent to parrot half-truth,  publish a deceptive article, and hope that gullible people will buy the lies.

Nwosu, reading his own narrative again would have become nauseated at himself and admit that his rambling narrative was indeed a tale told by an idiot, full of sound and fury, signifying nothing. As a party chieftain, rather than implement party resolutions, Akobundu resorted to imposition, thus creating crisis in his LGA and Nwosu is aware of this

Let it be on record that Nwosu who is grounded in Abia’s politics is aware that Akobundu’s highhandedness and imposition led to PDP losing the Ikwuano State Constituency House of Assembly seat to APGA in 2015. This was because Akobundu ceded the seat to a close relation and personal aide.

Did Akobundu hijack the party apparatus in his LG for his selfish benefits? Yes. It was Akobundu  that foisted his nephew, Stanley Nwabuisi, a young man with zero experience and barely active in Ikwuano PDP activities on the people of Ikwuano to represent them at the Abia State House of Assembly thus shortchanging loyal and effective party members. Akobundu was said to have also allotted the LGA’s lone slot for the position of the Special Adviser to the Governor to his younger brother; and made his cousin, the Deputy Transition Committee Chairman of the LGA. All of these people are from his clan Oloko, thus leaving the other clans feeling marginalized and disgruntled. And to continue with his reign of impunity, he ensured that someone from the same Oloko was selected as the Executive Chairman of the LGA.

Nwosu fully in possession of these facts choose rather to tell a tale told by an idiot, full of sound and fury, signifying nothing.

From lies to half-truths, Nwosu rambled on like attempting to give credit to Akobundu for Onuigbo breaking the jinx to be returned for a second term. Was Akobundu not the mastermind of a campaign to deny Ikwuano people their due representation?For Akobundu, Umuahia North should have produced the House of Representatives member, and also the Senator.

READ MORE:  Rochas Okorocha: I will win Presidential Election in 2023

The thing about lies is that they are barely consistent. In one breath, Nwosu says the PDP councillors who were shortchanged in the last LGA selection in Ikwuano “lost” because the people revolted against impunity by Rep. Onuigbo. In the next breath, he says they “lost” because Onuigbo “abandoned” them. Which one is it, sir? Did the people also suddenly buy forms for Labour Party candidates, screen them overnight? How come in the entire Abia State, only the councillors that they felt are loyal to Onuigbo were the ones that Labour Party suddenly defeated? And then on the day of inauguration all of them suddenly defected to PDP? Even if one is shameless, there are some lies that should be beyond one. To lie this shamelessly is disgusting and unbecoming of a man! 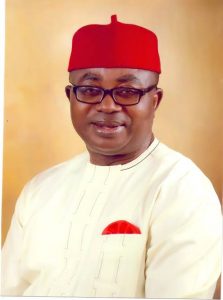 Nwosu would also want us to believe that the many projects attracted by Rep. Onuigbo were made possible because the Senator representing Abia Central was helping him attract the projects. The question is, how many projects has the Senator himself attracted? He is good at helping Onuigbo get projects but not good at getting his own projects? In any case, this assertion by Nwosu was another “copy and paste” from the pained statement released by the nameless Ikwuano PDP PRO.

One other misconception that Nwosu and his sponsors would try to push is to create the impression that a particular family fast-tracked Onuigbo’s political growth and thus hold up his defection as a sign of disloyalty. This is false. First, as noted earlier, most of these people fought vehemently against his re-election, but God shamed them. Second, Onuigbo, before his Commissionership assignment in Abia State, had served as a Special Adviser on Public Affairs to then Speaker, House of Representatives, His Excellency, Rt Hon Dimeji Bankole. Third, before the Special Adviser’s appointment, he had put in close to two decades of meritorious service at the U.S Embassy where most of those who claim to have made him politically were recipients of his benevolence and magnanimity. Going further, let it also be on record that it was Sam Onuigbo that facilitated the visit of US Ambassador Howard Jeter to Abia state in 2001 when Orji Uzor Kalu was governor and T A Orji his Chief of Staff. Jeter was in Abia to commission a block of classrooms at the Ambassador’s College, founded by him (Onuigbo).

It is understandable that Abia PDP is hurting from his defection. No team will be happy losing one of its best players to the opposition, but you cannot allow impunity to reign in your camp and not be willing to reap the fruits. Clearly, Abia PDP is on an implosion and it is a question of when, not if it will implode. Thankfully, signs abound that Abians are tired of despotic leaders and yearn to show them their rightful place. Woe betide anyone intent on keeping the people chained

Uganda’s Museveni on track for sixth term as president