We Shall Bring Political Tsunami In Abia, APC …As Peter Odinkemere, 35 Others join party

The All Progressives Congress, APC, chapter of Abia State, in Ikwuano LGA yesterday has threatened to cause an earthquake in the state, in their bid to end the hike in impunity allegedly perpetrated by the ruling party in the state, PDP.

The LGA Chairman of APC, Hon. Emmanuel Ekpo made this open declaration, at Amawom Oboro, while they received over 35 members of the PDP into APC.

It is no longer news that the people’s Democratic party, Abia State chapter in recent times looses a handful of her bigwigs frequently to the APC.

Speaking during a grand reception, the party Chairman, amidst heartbreak, described Abia State as a state in the worst terrible condition worldwide.

He recalled that as a founding member of the PDP in the LGA, he, alongside others unhesitantly took to their heels because they were deceitful.

“I was a founding member of PDP and I was there when the treaty was signed; from New Era Alliance we formed PDP. As a young boy, I put my money to launch PDP in Ikwuano. But when we discovered that there was no single truth in PDP, it is full of deceit, we ran away. You cannot tell me that you are in PDP, you only talk about your personal gain and the people are suffering and you say we are progressing.

“Abia is the worst state; there’s never been a place like Abia in the whole wide world. Ebonyi state that we used to make mockery of, today has taken off and we are far behind”, he wailed.

Speaking further amidst optimism, he said:
“Today, we have come to perform an important function and deep in my heart, I am very very happy. Because, I know by 2023 we’re going to win in Oboro Ward 1 by 99%, and 1% will go to some small area. “This is because I have seen quality men. When you see people like this here, are there still more persons in Oboro Ward?” 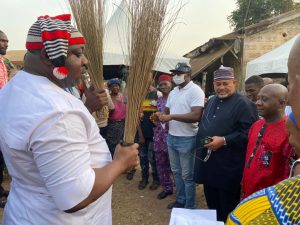 He congratulated the new members, noting that joining the party was in their best interest, hence there is no room for the marginalisation of members .

In addition, he maintained that the party which is devoid of intimidation and victimisation of her members, allows upholds collective decisions of members.

Hear him: “We’re one big family; take our decision together. We decide that this is what we’re going to do and once we decide on it, nobody opposes it because it’s a collective decision. We fail together and pass together in APC. In APC we don’t write lists in one oers

“As you are joining today, you’re equal stakeholders in APC. My brother who was our candidate for Councilorship in the last election was our brother from APGA who joined us two weeks later before the election. So, we don’t discriminate.

“They say we joined an Hausa party yes, it’s better for us because we were dealt with while in an Igbo party. Now we decided to join the mainstream party where truth is upheld.”

Meanwhile, he commended Evang. Peters Odinkemere, former SSA to Governor for courageously standing up in defense of the truth despite all odds.

It could be recalled that Evang.
Peters had reportedly, recently resigned from his position as the Senior Special Assistant to the state Governor, Dr. Okezie Victor Ikpeazu.

Nwaka lamented that Ikwuano had not experienced any form of change over the years, but thanked old members for their unflinching belief in the truth.

“We’ll never stop until Ikwuano takes its place in politics and I urge every member, old and new to remain resolute in our belief walk with Rep. Onuigbo”, he advised.

He said: “We were all in PDP before but we discovered that things were not done appropriately. In APC, young people are involved in decision making and our interest are ever protected.

“You have taken the right decision by joining APC. We must touch every blnook and cranny of Ikwuano and 2023 is a sure bet for us.”

Resounding, Evang. Odinkemere who spoke on behalf of defectors, in his euphoric mood, condemned the impunity in PDP and thanked APC for the warm reception.

Evang. Odinkemere pledged their relentless support and cooperation to achieve their aim, while promising their unalloyed loyalty to their new party.

“I’m very happy that this day has come to pass. I’m very happy to join the APC. I want to thank you for making it possible for us.
So, we’re saying thank you for receiving us. We promised to be law abiding citizens and loyal party men. Thank you very much.” He assured.

In his remarks, Evang. Abraham N. Osondu, Liaison to Rep. Sam Onuigbo, who also declared for APC lamented that Abia was broken beyond repair.

According to him, the essence of politics is to bring dividends of democracy to “our constituents”, but regretted that Abians had been subjected to abject poverty.

He recounted that Rep. Sam Onuigbo had become a full member of the APC, disclosing that “his reasons for leaving PDP are exactly mine!

“If you try hard to mend a broken window and it cannot, then you should replace the broken window. There’s no doubt in my mind that PDP, as a party in Ikwuano and the wider Abia state is broken beyond repairs.

“In the past 20years plus, our people have been crying to enjoy benefits of voting in their government in Ikwuano and Abia state. Their criers have fallen on deaf ears. I believe I can only bring change to my people by exiting PDP”, he said.

He described PDP as a “one man/family party in Ikwuano and Abia, stressing that his departure from the party would
end impunity and slavery.

Study of Trump-touted chloroquine for coronavirus stopped due...

Are grocery stores and pharmacies vectors for the...

This past week signaled a turning point in...

Encomiums Flow, As Abuja Based Asa...