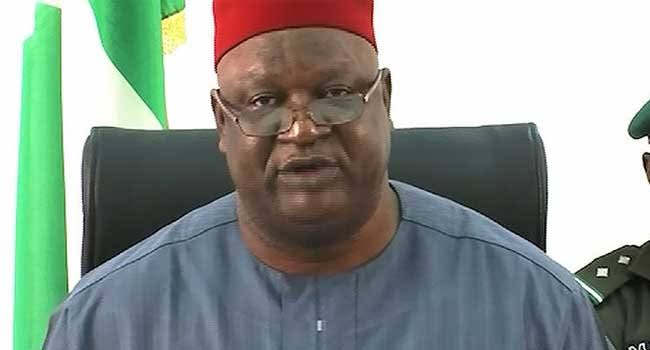 The Peoples Democratic Party, PDP, in Ebonyi state led by Elder Fred Udeogu on Tuesday has petitioned the heads of security agencies in the state over the removal of birthday billboard of the former secretary to the government of the federation, senator Pius Anyim by thugs.

Elder Udeogu who made this known while speaking with newsmen in Abakaliki, capital of Ebonyi state, however tasked the commissioner of police, Director of state security service, DSS, among others to fish out the perpetrators without much delay.

He however gave one month ultimatum for the sponsors of the purported thugs to replace the birthday billboard of the former Senate president, senator Anyim Pius Anyim or face its consequence.

Elder Udeogu, frowned at the rate in which the former secretary to the government of the federation Anyim Pius Anyim is being attacked by thugs allegedly loyal to the state government.

He said: “We are not having issues with the state government but the attacks and victimization that we have been receiving from that size is very unbearable, like the removal of our billboards.

“Last Friday, some concerned indigenes of Ebonyi state placed a giant billboard for the birthday of the former Senate president, Anyim Pius Anyim, at the Union bank junction and at the next morning, including the PDP billboard were all removed to the ground by thugs and we know those who sponsored them.

“We don’t encourage hooliganism in this state. If we have been doing that, this state wouldn’t have been governable. I am using this opportunity on behalf of my friends and the good people of the genuine PDP, to advice the people that are sponsoring these young men, to desist from that. I have always emphasis that nobody has the monopoly of violence.

“The point is that the state is too dear to us. This is a PDP state. And this is my state and I was one of the youths that fought for the creation of Ebonyi state. I wouldn’t like to watch some people destroy the state.

“I will never at any point in time join them in doing what they are doing. And they cannot lure us into fight, because we are more matured than them. But if they continue, we will have no option.

“They have more billboards in this state more than us. Assuming we start removing their own billboards, it won’t go down well with them. And it will be stupid of any human being, that you drop blood because of billboard. What is billboard? Why not allow the billboard to be there? It was paid for.

“I very much condemn that act. And I am emphasising that no right thinking being will allow him or herself to be used in that dastard act. And I assure you that those people who did it must be found out. I am giving them one month, we will get at them.

“I am calling on the security agencies to note what is happening because this people are trying to cause problem in this state.

“This billboard belongs to his Excellency, the former Senate president and secretary to the government of the federation, senator Anyim Pius Anyim. Anyim is our leader in PDP. In fact, he is a national figure. This is his state.

“His birthday was generally celebrated by all Nigerians and even outside this country. And so, why would people attack his billboard at his own state. Attacking his billboard, does it stop people from celebrating him? They are just being stupid and petty. There must be bitter repercussions on this they have done” he stated.

In a swift reaction, the commissioner of information and state orientation, Mr. Uchenna Orji, who spoke on behalf of the state government, however denied knowledge of the destruction of birthday billboard of the former secretary to the government of the federation, Senator Anyim Pius Anyim.

He said: “Yes, we are not away of any incident of attack on billboard. Billboard of who, for what purpose? We have said it severally that we will not join issues with Fred Udeogu and his tactics tendencies.

“Is it everything that happened in the market, Udeogu will call on the state government. But let’s tell him that we are too gentle and too responsible to join issues with him.

“Let him keep making false accusations and we won’t be distracted. We have no business with those he is linking in his allegation” he stated.