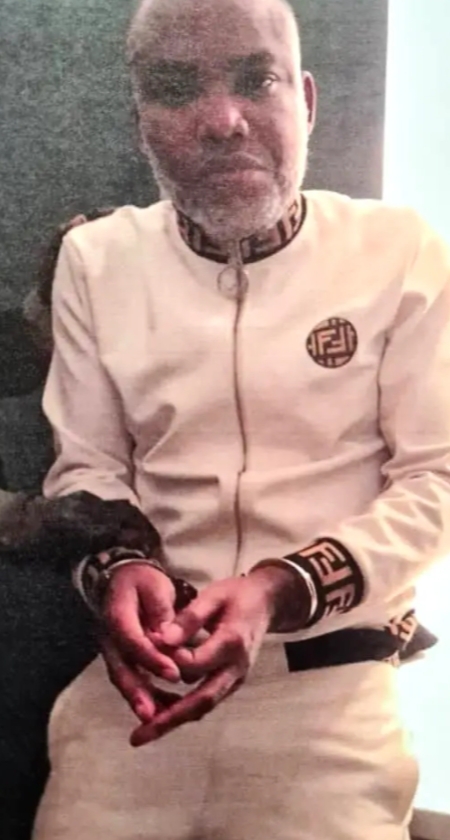 Ohanaeze Youth Council, OYC, has urged the entire members of the Indigenous People of Biafra, (IPOB) to refrain from involvement in any form of violence, assuring that efforts are being made to ensure the unconditional release of their leader, Mazi Nnamdi Kanu.

The group charged one Simeon Ekpa whom they accused of acting under a cloak of pretence in favour of the enemies of Kanu, thereby indicting the latter through criminal activities, to desist from such terrible acts.

This clarion call came, following the rising youths’ restiveness in the South East region, prompted by the emergence of the Eastern Security Network, (ESN).

It is no longer news that the leadership of IPOB had in the year 2020, launched their security outfit, the ESN in their quest to cushion the menacing activities of Fulani herdsmen killers in the region.

It would be recalled that the dreaded, armed Fulani herdsmen have over the years, sent innumerable souls in the region to their undue graves while destroying their farm produce.

To this effect, the apex Igbo Youth organization, OYC has, in conjunction with the Southern Nigeria Ethnic Youth Leaders Assembly advised the leadership of IPOB, MASSOB and other Pro-Biafran groups to become ambassadors of peace in the Old Eastern Region of Nigeria.

‘No one should take any action that will result to further incarceration mazi nnamdi kanu.

Simeon Ekpa should know that any more violent action in biafra land will lead to the delay of the release of Nnamdi Kanu. Umuchineke and Ndigbo all over the world will have no reason to believe that Simeon Ekpa is working for our enemies to indict mazi nnamdi kanu and make him to remain in DSS dungeon.

Briefing newsmen, yesterday, during a World Press Conference, at the Federal Capital Territory, Abuja, the National President of OYC, Comrd. Igboayaka O. Igboayaka advised Mazi Ekpa and all other members of IPOB on the need for the restoration of peace in the Southeast extraction.

In his address, Igboayaka lamented that the present generation had experienced what he described as a snail-pace pattern of peace and unity, which according to him, has proven ineffective and inefficient in sustaining the Nigeria political developments, as laboured for by Dr. Nnamdi Azikiwe who, according to history, had wrestled power from the then colonial Masters.

“Since 1966 till date, we’re aware that justice, fairness and equity have left Nigeria, After the Biafra- Nigeria genocide against the Eastern people of Nigeria, Injustice and Marginalization were promoted against Ndigbo. This singular act brought the rejection of Igbo new generation to be part of the country called Nigeria.

“Undoubtedly, this raised the call for Secession by Movement of Sovereign State of Biafra (MASSOB) and Indigenous People Of Biafra( IPOB). Since 1998 till date, there are chronicles of call from Pro-Biafrans groups for Nigeria to disintegrate.

He stressed that the federal government of Nigeria’ had, over the years, deployed several forceful strategies in their bid to stop the agitation, but, however, explained that the present generation of the Igbo nation are bent on actualising a united nation through dialogue.

The address read in detail:

“At every point, Nigeria government has applied conventional and confrontational methods to address the call for the restoration of Biafra by the Old Eastern Nigeria, in order to secede from Nigeria and these methods have failed severally in the past 57 years. Therefore, our generation believes that WHAT WE DIDN’T ACHIEVE WITH VIOLENCE IN 57 YEARS: WE CAN ACHIEVE IT WITH DIALOGUE IN 57 MINUTES.

“Today, Southeast has become a semi-battle field as a result of how Nigerian government had approached IPOB when they launched the Eastern Security Network (ESN) in 2020. As we have been made to believe, from the sense of history, Gen. Yakubu Gowon and Gen. Emeka Odimegwu Ojukwu could have tactically avoided the event of 1966 to 1970 in Nigeria. Unfortunately, we the new generation and the present government of Nigeria have lost the sense of history; we are now making the worst dangerous mistake like Gen. Yakubu Gowon and Gen. Emeka Ojukwu.

“But fortunately for us, the Federal government has embraced the political solution to Nnamdi Kanu case, as initiated by Prof. George Obiozor, the President-General of Ohanaeze Ndigbo Worldwide. We, therefore, advise IPOB and any sprinter group to shun any form of violence especially at this Easter period, when Christians gather in celebration of the death and resurrection of our Lord Jesus Christ.

“This will also pave the way for peace as the process of the unconditional release of leader of IPOB is being perfected with Nationalistic and Patriotic approach by President Mohammadu Buhari’s led federal government.

“It’s also important that Federal government should heed to our call to withdraw every military operation, hundreds of military and police road blocks in Southeast that are raising security tension in Southeast.

“At this Juncture,we want to draw attention of the world and Nigerians against the unpatriotic statement of one Shettima Yerima Arewa Youth Consultative Forum President who on Friday, 8 April 2022. Yerima stated that, and I quote, “We Will Declare Northern Independent”. If PDP or APC gives Igbo man Tickets”. Mr. Shettima Yerima lacks sense of history and knowledge that today’s Nigeria is bleeding. Nigeria is suffering from a chronic political pandemic, and the vaccine to cure this nation threatening pandemic is the Nigeria president of Southeast extraction 2023.

Therefore, APC and PDP presidential tickets are naturally and morally the right of Southeast presidential Aspirants which is an integral part of political solution to Nnamdi Kanu and IPOB case.

We call upon Sen. Hope Uzodinma to lead other Governors of Southeast extraction to collaborate with President General of Ohanaeze Ndigbo Worldwide Prof George Obiozor to facilitate speedy release of Nnamdi Kanu.

In Conclusion, the Unconditional release of Mazi Nnamdi Kanu and ceding of APC and PDP presidential tickets to Southeast will heal the the 57 years old wounds(1966-1970) in Nigeria Within 57 minutes.

“I encourage every lover of Freedom (Umuchineke) all over Biafra land to Remain calm as every meeting currently ongoing geared towards the unconditional release of Mazi Nnamdi Kanu will be perfected Within One Month.