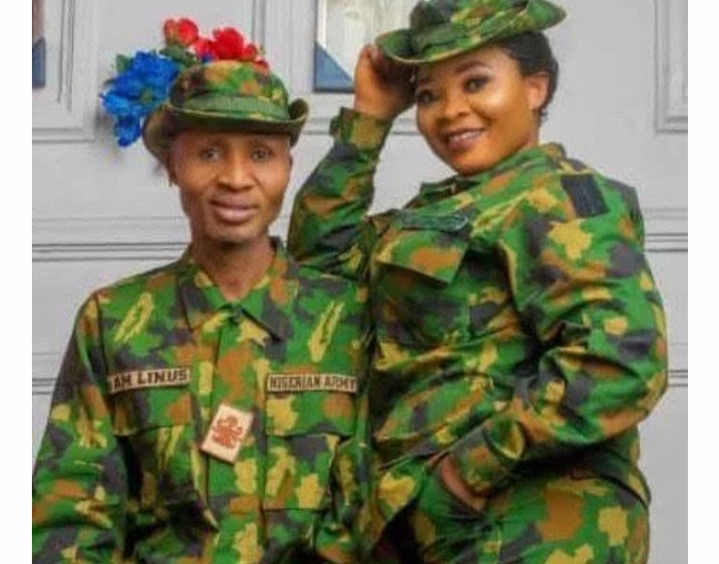 Contrary to the allegations levelled against the Indigenous People of Biafra with regard to the recent gruesome killing of
Master Warrant Officer Audu Linus and his fiancée, Private Gloria Mathew, IPOB has denied involvement in the killing.aq1 as

The couple were reportedly shot and beheaded by gunmen on their way to Imo State.

It was also gather’ed that Officer Linus, in his state of helplessness, was made to watch the vicious killers assault her Fiancee before ripping life off the duo.

Reacting in utter fury and astonishment to the gory incident, IPOB, described the act as abominable in Igbo land, adding that no true Igbo would hurt an in-law.

In a statement on Wednesday, the group’s Media and Publicity Secretary, Emma Powerful, described the accusation by the Nigerian Army of IPOB’s masterminding the act as “laughable and fallacious”.

He said, “No true Igbo will hurt an in-law, how much more a married daughter (Ada) in Igbo land. Even the ancestors will avenge such wickedness.

“We cannot kill our sister who is about to marry, but those who killed them were those Nigerian government and its security agencies, especially the military and DSS, created to demonise IPOB and ESN. These agents of death, some of whom we have made their identities public severally, are behind the killings of these soldiers, not IPOB or ESN operatives.”

Powerful claimed that the Army had always looked for occasions to attack innocent Igbo youths in order to rope them in the aftermath of the act and tag them as suspects.

“The Nigerian Army should leave IPOB alone because we are not unknown gunmen. The monster they created is now after them, yet they keep pointing accusing fingers at us.

“Our only crime is that we want to be self-determined. How come it is only in Nigeria that IPOB members are cannibals? When will they stop lying against us? Nigeria security agencies should please leave us alone. We hate bloodletting. We are not killers. God will judge all those trying to paint us black and evil for what we know nothing about,” the statement added.

According to Buhari, the victims’ corpses were inhumanely treated and gleefully posted on social media platforms.

The President, in a statement on Wednesday by his Senior Special Assistant on Media and Publicity, Garba Shehu, expressed shock at the act, which he said was alien to all cultures and civilisations.

Buhari called on all leaders — community, regional and national — “to speak with one voice to show that the entire country is one against this cruel and barbaric act of violence. This is unacceptable.”

“Our thoughts and prayers are with the families of this sad and tragic incident,” he added.

He directed the military authorities and security agencies to ensure that those involved in the killing were apprehended and brought to book.