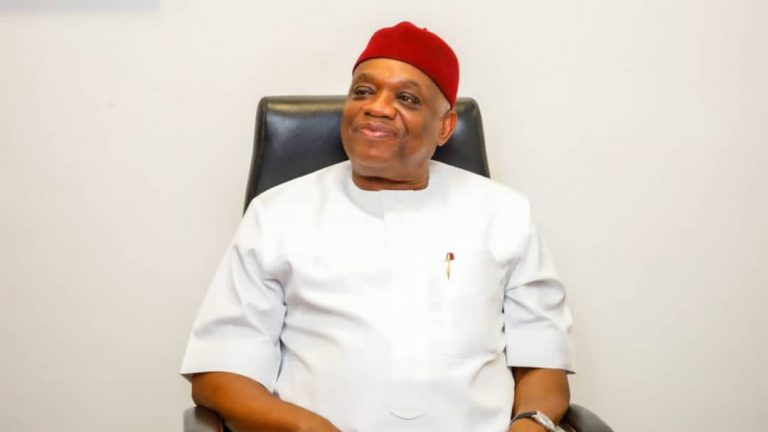 A cross section of Igbos have backed the call made by the Chief Whip of the Senate, Senator Orji Uzor Kalu for power to be retained in the North due what could they described as the refusal of the South-West and South-South regions to support the Southeast’s Presidential bid.

Orji Kalu a former Governor of Abia state and current legislator had on Monday advocated for the retention of power in the North, specifically the North East part of the country over what he described as disregard for the South-East by the South-West and South-South regions.

According to the Senator the South West and South South are insensitive to the political plight of the South-east , stressing that since the advent of the fourth republic, apart from the South-East and North-East, the other geopolitical zones of Nigeria have had a shot at the presidency.

Kalu during a live appearance on Channels TV’s  ‘POLITICS TODAY’ program, held that Igbos in the South-East were being betrayed and sabotaged the Southwest and South South whom over the years had enjoyed the support of the South-East to produce past Presidents and the current Vice President, Osinbajo.

The former Governor emphasised that the majority of South-easterners will queue behind the North-East for Presidency if they’re Presidential bid is not reciprocated by the South-west and South South geopolitical zones.

Rallying behind Kalu’s stance a cross section of Igbos took to their social media platforms to lend their support for power retention in the North, pledging to vote for the North East to produce the next President.

Anselen Chineke commenting on Channels TV Facebook page said that Orji Kalu’s stand is line with the general opinions of Igbos in the South-East.

Obi Egwu opined that the South-east were not considered good enough to produce the next President; it made no sense to support any candidate from both the South West and South South.

He wrote; “If South East is not good enough to produce president, then why should we support a candidate from South West or south south whom have taken their turns in OBJ and GEJ? OUK go on with the campaign Biko”.

Another user Orji Uka by name wrote ; “Very strong and valid point, and only the wise will understand. It must be South Easterner for presidency, any other person is gatecrashing”.

On his part , Charles Izu Ezeonyirimba expressed that power should go back to the North if the South East are denied the Presidency Ticket. He wrote ; If not South East.   Let it go back to North forever.  This is our stand in igbo land”.

Other comments as captured read ;

Ikenna Nwokedi; ‘Practically speaking, Senator Orji Uzor Kalu is absolutely right. If south south and South West can’t support the south east, why keep power in the south? When both south west and south south have had their turn. Equity and fairness is vital. South east supported Obasanjo in 1999 against Alex Ekwueme, south east supported President Jonathan in 2011, why can’t they two geopolitical zones supports us. Primarily, winning the primary election has to do with delegates. In a country of 19:17 states ratio. Do the mathematical permutation and you will see that Orji Uzor Kalu was very politically empirical”.

Muhammad Shafie; ‘I like his courage. All these southerners shouting power must return to the south will not agree to zone it to south East. So who is fooling who?’.

Prince Kelechi; ‘If South West and South South can’t support South East presidential bid.No need to support them. It should go back to the North”.

Ifeanyi Iheukwumer; “Agreed 100 % , if SE can’t produce the president,  let the power return to the North…”.

Chimeremezie Tochukwu; “Thank you distinguished Senator. You couldn’t have said it any better. Justice,equity and fairness demand not just south but south east to produce the Nigerian president,if not,the North should hold it”.

Emmanuel Ibe ; “He has a point in what in he is saying, he is referring to the entire south. If the entire south cannot unite and endorse an igbo man for the sake of equity, then let the presidency go back to the north. If possible Buhari should do another 8 years tenure. Southern Nigeria is wicked to itself”.

Duncan Amara Ekechukwu; “Orji is 100% correct, if they don’t want a S/E president,  we’ll vote for the North, we are not 2nd class citizens”.

Ekeme Emma; “Honestly every well meaning igbo politician across both parties must validate this stand, one of the greatest strategically thought out plan from a living politician of igbo origin”.

Charles Chidi Nweke; “I agree with you sir it better the north keeps it”.