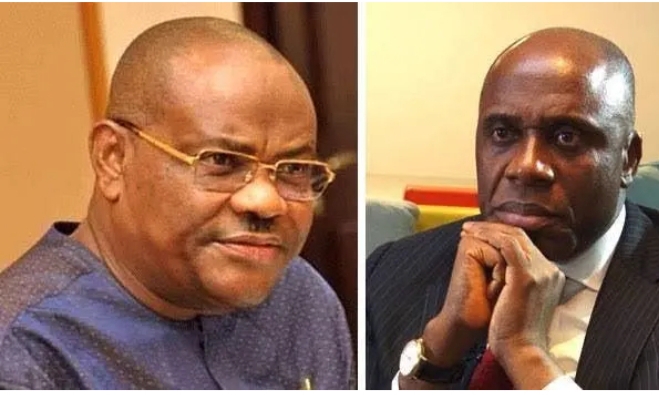 The Government of Governor, Nyesom Wike of Rivers State is steaming for a fresh war against the immediate former Minister of Transportation, Rotimi Amaechi.

This is as Governor Wike has filed criminal charges against the immediate past Governor of the State.

The fresh probe comes after Mr. Amaechi, a former Rivers State Governor and ex-Minister of Transportation, lost his bid to clinch the All Progressives Congress Presidential ticket during the recently concluded Presidential primary.

READ MORE:  ABIA PARIS CLUB REFUNDS: Stealing On An Industrial Scale *Ikpeazu was aware of the existence of the so-called consultants and the questionable agreements...

It would be recalled that last month, the Governor Wike, had posited that the prosecution of his Predecessor, Amaechi with focus on an alleged N96bn fraud would be strictly determined by the leaders of the state.

“One of it was a diversion of $50 million from Rivers State Government through Access Bank to Sahara Energy,” Mr Wike said. “And the issue became, what did Sahara Energy do for us that we are paying $50 million? Where is the agreement to show we borrowed money from them? Nothing.”

“You said Sahara Energy bought our gas turbines. Why are we paying them $50 million? Did we borrow money from them? Where is the agreement?” Wike questioned.