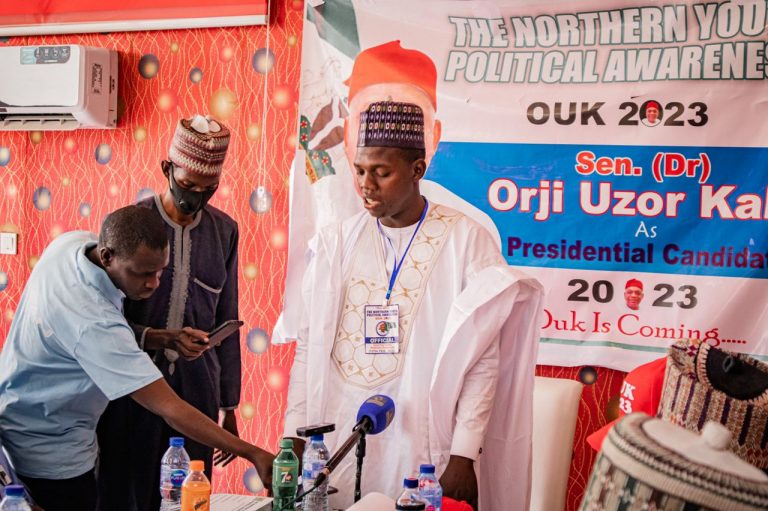 A group, Arewa Summit International has lambasted Comr. Sani Saidu Muhammad and his group for telling them to withdraw their endorsement of Senator Orji Uzor Kalu as Nigeria’s next president in 2023.

The group in a statement on Monday in Yola, Adamawa State capital, signed by its Director General, Dr. Bashir Lamido, faulted Muhammad and his group for accepting to do hatchet job against the Chief Whip of the Senate.

The group insisted that Kalu remains the best presidential material from the South to succeed President Muhammadu Buhari, noting that his relationship with the North is over 35 years.

The group accused Muhammad and “his co-travelers” of bad faith and of doing a hatchet job “lacking in substance”.

The statement linked the release by Muhammad and his group to desperate political forces afraid of Orji Kalu’s intimidating political profile ahead of the 2023 elections.

d led by Sani Muhammad, a serial liar and blackmailer whose known job is extortion and causing crisis.

“It is pertinent to inform him that Nigerians have gone past the era of playing ethnic and religious card during elections. Nigerian are united in choosing a credible leader from the South East geo-political zone and that person is the Chief Whip of the Senate, Senator Orji Uzor Kalu.

“We won’t tolerate any act of selfishness from Northerners like him doing a hatchet job for desperate politicians afraid of the popularity of Senator Orji Uzor Kalu.

“Our statement is valid and our support for Kalu stands. We won’t as a region surrender Nigeria to his sponsors who are local champions like him. We are committed to building a peaceful and united Nigeria with Dr. Orji Uzor Kalu,” he said.