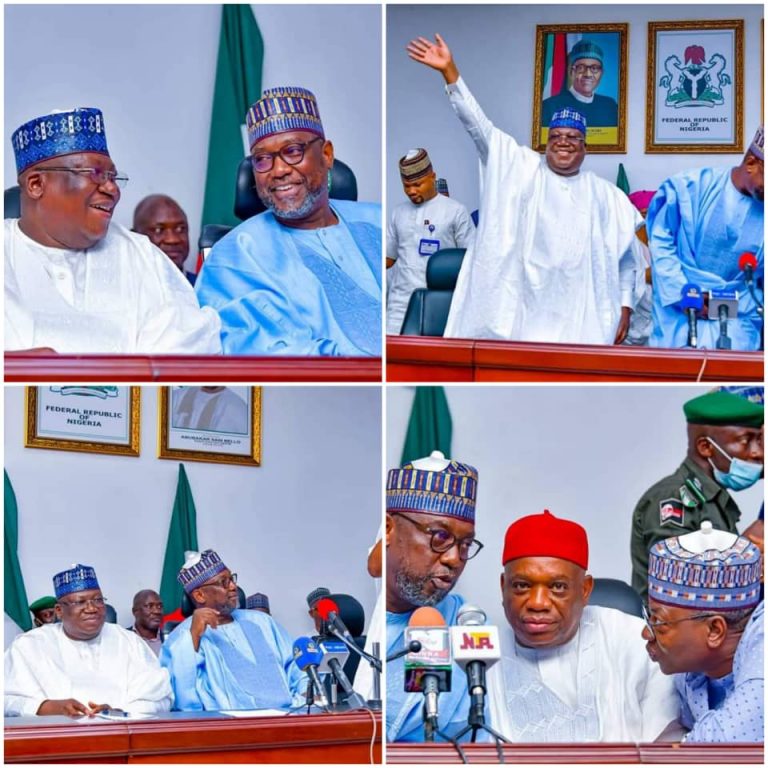 For ensuring a  peaceful, stabilised and a rancour free 9th Senate, despite party disparities and interests President of the Senate, Senator Ahmad Lawan has received accolades from the Governor of Niger State, Governor Sani Bello , who also lauded the Senate President for anchoring synergy  between the legislature and the Buhari led executive.

Ahmad Lawan having served at the Nation’s Apex Parliament for 23 years is also vying for the 2023 Presidential seat. Lawan has largely been commended for his leadership role at the Red Chambers amongst which include,despite being a member of the majority party in the Senate the Senate President ensured the allocation of Chairmanship of notable committees to opposition party Senators.

Governor Sani Bello gave the accolades on Monday when he hosted the presidential aspirant who visited the state capital to consult with delegates for the presidential primary election of the party at the Government House Minna.

According to Governor Bello Lawan, having worked at the National Assembly for 23 years, and as the current Senate President who has been able to work with his colleagues to ensure peace and stability at the upper Legislative Chamber irrespective of their party differences, he can replicate the same in the entire country if given the mandate.

Bello said; “No one has the record of the Senate President in terms of being a lawmaker adding that it’s a testament that the aspirant is a good man.

“He has been in the National Assembly since 1999 and I don’t think anyone has broken that record in Nigeria  and that shows that he is a good man”.

” I believe that mandate is service and he has served well enough to become the next president of the country, promising to build on the successes of President Muhammadu Buhari, ” Bello concluded.

Sani Bello also added that Lawan’s years of patriotic public service has provided the Presidential hopeful adequate qualifications to succeed President Muhammadu Buhari. He assured the Presidential Aspirant, Lawan that Niger state delegates will do what is right during the presidential primary election of the party

Addressing the attentive assembly of party delegates Senator Lawan, who acknowledged the insecurity in Niger State and the efforts of the state and federal government to address it, emphasized that security, agriculture, education and economy will be his top most priorities when he becomes Nigeria’s president.

He disclosed; “It is my intention to build on the successes that our President will attain when he leaves office. I believe that we need to consider the architecture of our security system. I believe in citizen participation in security. I want to see a situation where citizens who volunteer to give security information are protected. I want to see a situation where the traditional institutions play a role in securing our communities. That will be my priority.

“I also want to have the opportunity to serve as President to build on the successes of President Mohammadu Buhari on the economy of Nigeria. I  believe it is not yet what we want but we are better than many countries.

Lawan continued; “Niger state is an agricultural state. I want a situation where at least every zone in the state will have one crop that will be known for production, processing and for marketing. That is to say it is not enough for us in Niger state to produce yams only. We should produce the yams, process the yams and sell them with higher value. I believe that this is one way to deal with  youth unemployment and poverty.

In their separate remarks, Senators Orji Uzor Kalu and Sani Musa, who are part of the campaign team of the Senate President told the delegates that they brought a good market to them assuring them that their aspirant has the capacity and competence to lead the Nation and they will not regret voting for him.

The Senate President and Presidential Aspirant was at the Palace of Emir of Minna, Dr. Umar Farouq Bahago to seek his royal blessings. He also urged the state Chairman of the party, Haliru Zakari Jikantoro, to ensure violent, free,  and fair primary elections in the state.