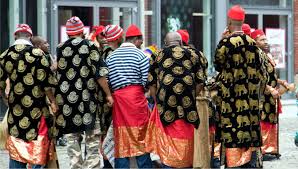 The apex sociocultural organisation in Igbo land, the Ohanaeze Ndigbo Worldwide, has commended a former President of the Senate, Chief Anyim Pius Anyim and the Chairman/Chief Executive Officer of Neimeth Pharmaceutical Plc, Masi Sam Ohuabunwa, for declaring their intention to run for the Presidency, come 2023.

According to the apex Igbo body, the North was sympathetic to the current plights of the Igbos in the country, adding, “They will support the Igbo Presidency.”

The Secretary-General of the Chief Chidi Ibeh-led Ohanaeze Ndigbo Worldwide, Chief Okechukwu Isiguzoro, stated this in a statement on Wednesday night.

Stressing that Anyim and Ohuabunwa’s intent to contest for the Presidency in 2023 was a step in the right direction, the group observed that their declaration had proven the South-East had qualified people to lead the country.

According to the statement, “We, the Ohanaeze Ndigbo Worldwide, led by Chief Chidi Ibeh, commend the two Igbo illustrious sons-the former Senate President, Chief Anyim Pius Anyim and the Chairman of Neimeth Pharmaceutical, Mazi Sam Ohuabunwa, for showing interest to contest the Presidency, come 2023. These two Igbo personalities have proven that there are capable hands in the South-East region with proven track records, to lead Nigeria. We are proud of them.

“There is no better time to seek for the Igbo Presidency then now. It is not out of place or an aberration should the Igbos occupy Aso Rock come 2023, because history will vindicate us. We call on Igbo leaders to join hands and work together to ensure that this dream is actualised in 2023. This is not the time for name-calling, propaganda and backlash. This epoch calls for unity of purpose among Igbo leaders, because we have a lot to gain, than lose if we push to actualise Igbo Presidency in 2023.

“Therefore, we call on all other Presidential faithful of Igbo extraction to openly declare their interest to contest like Senator Anyim and Mazi Ohuabunwa, did. We encourage them to throw their hat in the ring.

“The coast is now clearer for the Igbos to achieve the Presidency. We are very convinced that we will get it this time around. We have just finished a closed door meeting with Northern leaders and the outcome of the meeting is every encouraging and supportive. The Northerners, we know, as peace loving Nigerians and other regions are sympathetic to the plights of the Igbos at this time. They will support the Igbo Presidency. Therefore, other Igbo sons and daughters should join the race.

“As former President of the Senate, Chief Anyim, made the Igbos proud and has remained a detribalised Nigerian. As former Secretary to Government of the Federation, Chief Anyim brought his humility and wealth of experience to bear, to ensure the government he served succeeded. He has never betrayed anybody that worked with him. He has shown that the Igbos are detribalised Nigerians and accommodating. We commend him and encourage him, and other Igbos sons and daughters, to sustain the tempo to actualising the Igbo Presidential Project in 2023.”