2023 Presidency: Gburugburu Ndigbo Reveals Sure Alternative For Ndigbo If Relegated

The President-General of Igbo World Union, (IWU), HIM, Amb. Sir Dr. Mishak Nnanta has reiterated that ASO Rock has been mapped out for the Igbo nation come 2023.

Gburugburu Ndigbo Dum stated this in compound, at Umuajata-Olokoro autonomous Community, Umuahia South LGA of Abia state, during an interaction with members of the Unity Federated Chapel of Abia State Council of Nigeria Union of Journalists

The renowned Igbo leader reassured Ndigbo that their long awaited promised land would be attained in a couple of years.

He restated optimistically that the Igbo nation shall produce the next president despite all odds, as he urged the people to remain law abiding.

However, the IWU President insisted that relegation of the nation by 2023 would prompt them to consider a last resort, hence Biafra actualization.

Hear him: “ASO Rock is for Ndigbo by 2023. Nothing can be done about it. I’m certain it’ll happen but if it doesn’t happen, then we shall return to our land”, he insisted.

Meanwhile, HIM Nnanta said the battle for year 2023 Igbo Presidency will be better achieved through consistent dialogue, other than verbal war and physical battle.

He recalled that from the year 2002 to 2004, he had informed the Igbos on the realization of the Igbo presidency of year 2023 and the need to support the Nigeria unity and the administration of President Muhammadu Buhari which came on board from the year 2015, of which most Igbos who couldn’t buy the idea nearly lynched him.

Nnanta reminded the Igbo politicians that the actualization of Igbo presidency is within their reach.

He further advised them to strictly avoid certain acts capable of causing them miss the golden opportunity.

His words, “Igbo unity remains paramount to the actualization of Igbo presidency in the year 2023. At the peak of the unrest in the Northern part of Nigeria, Igbo World Union went to the remotest part of the country, preaching peace and unity of Nigeria. So Ndi Igbo should work together and shun pull him down attitude”.

He enjoined the members of the Unity Federated Chapel to live in peace and project the course of humanity through objective and investigative reporting.

Nnanta also lauded the chapel for the recognition done to him, describing it as a honoured decorated with God’s special Grace and mercy, as money cannot buy the recognition.

READ MORE:  Revealed!! Shocking Things You Might Not Have Known About Abba Kyari

“Money cannot buy everything. It cannot buy prestige. Whatever you do, someone is taking the record. We should strive to do go because it will stand the taste of time”, IWU President General said.

Respectively, the Abia State chairman of IWU, Mr. Chukwuemeka Jim, former President General of Olokoro clan Development Union, Chief Patrick Okwuonu and a retired principal, High Chief Jerry Onyemachi described Nnanta as the trust of the Igbos, a perfect circle and a covenant child who rose from grass to Grace and reminded him that a reward for a good job is more jobs, especially in the fight for Igbo course.

Earlier in his speech, the Chairman Unity Federated Chapel of the Abia NUJ, Comrade Chidi Asonye lauded the sterling heights achieved by the IWU and encouraged the President General of the organization not to relent in his efforts to ensure that the Igbo identify does not suffer.

The event featured the conferment of special recognition (Ome nke oma ndi Igbo dum) on the chairman of the Unity Federated Chapel and the presentation of patron certificate to the IWU President General. 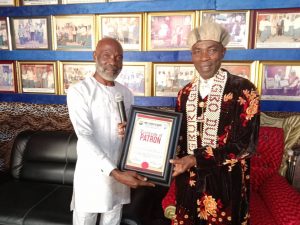 I Will Not be Cowed, Ex-NDDC Boss explodes,...