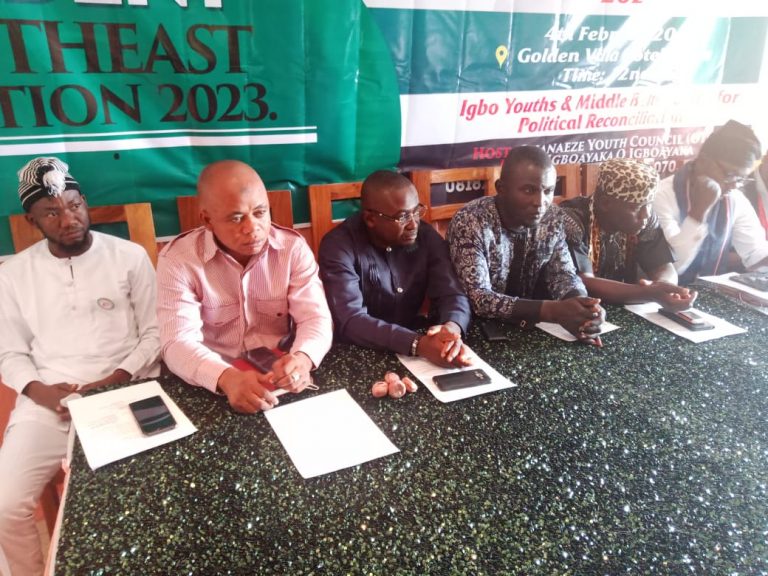 The Apex Socio-cultural organization of Ohanaeze Ndigbo the Ohanaeze Youth Council, (OYC) in conjunction with Middle Belt Ethnic Youth Leaders Assembly, (MBEYLA) has vowed to restore Nigeria to her lost glory, hence ‘the Giant of Africa’.

This is even as the Council led by her National President, Comrd. Igboayaka O. Igboayaka hosted delegates of MBEYLA, in Enugu, yesterday, Friday 4th February, during a one-day Summit, to address the political “Injustice and Marginalization meted out on Southeast and Middle Belt regions of the country since the new political dispensation.”

In a communique signed by Comrd. Lohnan J. Samson and Comrd. Gaallah Daniel, Vice President and Secretary-General of MBEYLA, respectively, and Comrd. Igboayaka, the duo of OYC and the group agreed on a further “Familiarization and Unity Building” between Ndigbo and Middle belt people.

This as gathered, is strictly in adherence to the call for both regions to figure out various similarities that unite them, in terms of culture and belief system.

The duo frowned at the revaging security challenges in the regions, while outlining possible ways to mitigate same.

They highlighted the need for the government to strengthen the country’s security architecture, while urging the citizens to aid in providing meaningful information to proffer thorough investigation, apprehension and prosecution of criminal suspects.

The Communique read in part:

“On the political fairness, justice and equity in terms of zoning of Nigeria presidency, there was equally a consensus voice and serious charge on the citizens, authorities, stakeholders and politicians to ensure equity in the Zone of Southeast Nigeria that have not produced the president of Nigeria since 1999, and pledge to political parties that their Presidential tickets should favor the Zone that have not produced President.

“After x-raying the mistake of our fathers role in Nigeria Biafran Civil-War, we have vowed not to take arm against each other no matters the high level of conspiracy or provocations. Ndigbo and Middle belt people have almost 97% samilar cultural values and beliefs system”, the Communique read.

In his remarks, Comrd. Gonet Luka Ngas President of Platue State and the National chairman of Indigenous Ethnic Youth Leaders of Nigeria, stressed the importance of political equity, saying it is as a method that will grant political stability and development in Nigeria.

Also, Comrd. John Umaru, the National President of Mada Ethnic Nationality and State Chairman of Nasarawa Indigenous ethnic nationality youth leaders in his speech, urged Southeast to bolst their voting strength, stating that “Ndigbo should convert their population into a political capital for political advancement.

READ MORE:  How TB Joshua Predicted Orji Kalu As Nigeria's Next President Before His Demise

Corroborating, the National President of MDZOUGH U TIV Youth, a Social cultural Organization of TIV Youth comrade Teryima Joseph cautioned about consensus candidacy, stressing the “more candidates coming from Southeast will enable the voters make a credible and competent choice in 2023 presidential election.

Meanwhile, MBEYLA assured Ohanaeze Youth Council and Ndigbo in general, that they would continue on more political consultation and mobilization of their various ethnic nationalities to ensure Justice and equity in the political equation of 2023 presidency.

Addressing newsmen, Comrd. Igboayaka, OYC President reemphasized that Nigeria “is suffering from political pandemic and the only suitable vaccine to this chronic political pandemic is Nigeria president of Southeast Extraction in 2023. He opted that Southeast will not tolerate political 3rd Eleven to represent them in Presidential Project in 2023, but in strong term urged Gov. Ogbonnaya Onu, Gov. Peter others who are eminently qualified in the political First Eleven in Southeast to declare interest to save Nigeria from sinking.

“The 1967 -1970 War taught Ndigbo and Middle Belt a lesson, it’s time to heal the wounds, the new generation of Ndigbo and Middle Belt has learnt their lessons also through the history of the war. Therefore, Nigeria president of Southeast extraction in 2023 is a political child in Nigeria that it’s time has come, it’s a new political solution to the mistake of the Nigeria-Biafra civil war, Comrade Igboayaka stated.