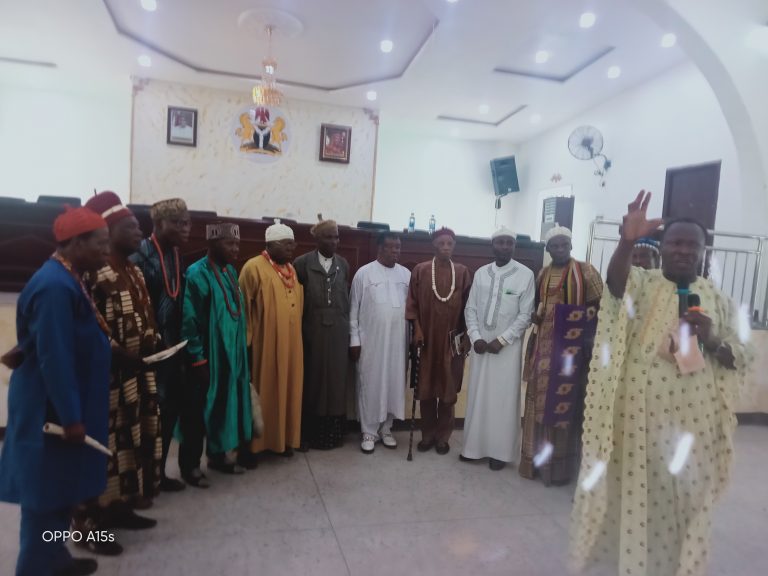 A globally recognised Minister of the gospel, Rev. Dr. Uma Ukpai has advised Nigerians from other regions of the country to see Ndigbo as fellow Nigerians’ who are entitled to their own rights and as such, can lead the nation.

The prominent son of Igboland admitted that no man could be devoid of faults, adding that “our rights could be what others have, if they can rule Ndigbo can also ruler, nobody is without any fault; nobody but a man that knows his weakness and fault is a better man than the man that kills his enemies”, he said.

The prayer session which was convened by HRH, Eze (Evang.) Ogbuka Abara Origa with the theme: “Redeeming The Pride and Glory of Ndigbo in the Contemporary Time”, was organized in Collaboration with the Christian Association of Nigeria.
(CAN)

Citing from 1st Samuel 2vs29-30 and 2Conriethians 7 vs 13-14, Rev Ukpai condemned the way people have gone forgotten God in their ways of Life while regretted the increasing dis-respectful attitude of youths from the South East Zone against their Elders and parents which can not be displayed by youths from other Major ethnic groups in the country. 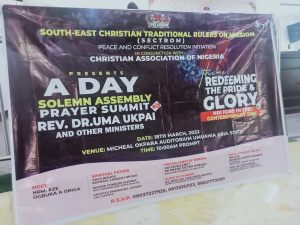 The Internationally acclaimed Evangelist, who described ignorance as the highest mountain confronting the existence and actions of men, bemoaned the piteous state of the Igbo nation over the years.

Furthermore, he reiterated that it was high time an Igbo man took up the mantle of leadership in Nigeria.

“Ignorance is the highest mountain in any Man’s life. What is happening is making me cry, I weep from inside. I do not know if you know that every Igboman is a Periwinkle.

“Why in Igboland that we have no respect for God. What makes me cry is that the Igboman does not remember those who has helped him when he was nobody, man who forgets who helped him can not succeed.

“It is the time for an Igboman to become the President of Nigeria, but he not that favour, a man who has no respect for his Father or Mother can not get favour.

Speaking further, he regretted that “the worst thing in life is to look at what others look at and not seeing what you can see.

He, therefore, enjoined traditional rulers in the region to constantly consecrate an Altar for God in their palaces thus ask for God’s wisdom and at the same time, raise questions on how to tackle different challenges confronting the Zone.Re

Addressing newsmen, the convener of the prayer summit and member of the Abia State Traditional Rulers Council lamented that the group’s
major challenges, among others are; the elimination of the Outcast System being practiced in most communities in the Zone, the change of attitude towards perceived perception that Ndigbo “has no regard for constituted traditional Institutions and Ignorance among some of the people within the Zone.”

According to the traditional ruler of Ice Okorie Ogon Autonomous Community, in Abam Onyereubi in Arochukwu Council area of the State, SECTROM whose mission is to foster peace and conflict resolutions is widely known across the South East Zone.

Hear him: “The SECTRON has come together to fight this two demons ravaging the South East and once we settle these two problems, if we can, we will then look at how to tackle that of the ignorance among Ndigbo, if we can be able to tackle this three demons then we could have saved the South East, he assured.

Eze Origa urged Ndigbo to evaluate their characters with a view to eradicating their shortcomings.

“Igbos are in trouble, we are not looking into our character, Igbos are stubborn beings and our problem down here are enormous, we lack that knowledge, all the suffering are as a result of the negligence of the word of God. I advice my Igbo brothers to go back to the covenant of Abraham”.

According to Rev. Amalambu, “any prayer that centers on the unity and oneness, people will act as a catalyst for our political success. Currently, the enemies of Igbo nation have used money and other sources of inducement to divide Igbo land.

“This has invariably reduced our pride and glory, especially in political sectors. The fearless and courageous clergy passionately called on Igbo nation to unite her God’s given strength to bring back the Lost positions in the leadership of this nation (Nigeria).

Rev Amalambu who commended the traditional rulers for recognizing the Lord Almighty as the Great King over their different kingdoms, prayed to God to bless all the Kings in Igbo land who relied on the Lord Almighty the needed wisdom, strength and good health.

Rev. Amalambu further appealed to all Igbo youths to unite their strength for a common goal, hence restoring the pride and glory of Igbo nation”, lamenting that, “we must not remain Second Class Citizen in our own land.

“The time is now. Any further delay will spell doom for us. Let all Igbos from the age of 18 years and above get their Permanent Voters Cards (PVC). Political affiliation notwithstanding, let us work as a team to get back what belong to us. Enough is enough, let us shine our eyes now or it will be too late, the Rev gentleman concluded.

Highlights of the prayer summit is intercessory prayers said by anointed ministers of God and the presentation and unveiling of a book written by the convener of the event.

Meanwhile, attendance at the event included traditional rulers across the South Eastern States and some prominent Ministers of the gospel, among whom was Pastor James Msonter (aka. Egbeligwe), the resident Pastor of Dunamis International Gospel Centre, Umuahia, Abia State.