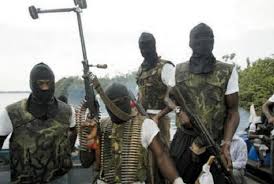 A 65-year-old man, Nathaniel Onwe, of Ishielu, in Ishielu Local Government Area of Ebonyi State, has been shot dead by gunmen who attacked him and his 25-year-old wife in their house.

The incident occurred, on Tuesday, at about 9:30pm when the couple were sitting in front of their compound discussing.

The gunmen reportedly shot the man on his chest and shot the wife on the leg, leaving the compound without stealing anything thing from the couple.

She said, “Around 9:30pm (on Wednesday), two un-identified gunmen invaded the house of one Nathaniel Onwe, aged 65 and his wife who, is aged 25 years. While they were discussing at the sit-out in front of the compound, gunmen shot at the man at his chest and also shot the wife on the leg.

“They abandoned the victims in the pool of their own blood and escaped into the bush from the backyard where they came from.

“Neighbours rescued the victim and took him to the Alex Ekwueme Federal Teaching Hospital Abakaliki 2. But Mr. Nathaniel Onwe could not make it, he was confirmed dead. His remains has been deposited in a mortuary.

“SUPOL in Ishileu said he mobilised his men in the area, who combed the bush where the incident took place but hey could not arrest the gunmen.

“The second victim (his wife) is responding to treatment in the hospital. Efforts are seriously on-going to track down the suspects and the Commissioner of Police on hearing the matter, has not been happy. He he has the immediate transfer of the case file to the State CID for discreet investigation.”