Abia State Governor, Dr Okezie Ikpeazu, has the 29 new traditional rulers in the state to refrain from any act that will be inimical to the growth and interest of their immediate communities, local government areas and the government of the State.

Governor Ikpeazu gave this charge while presenting Staff of Office to the twenty-nine (29), new Traditional Rulers, from across the State at Michael Okpara Auditorium of Government House, Umuahia, 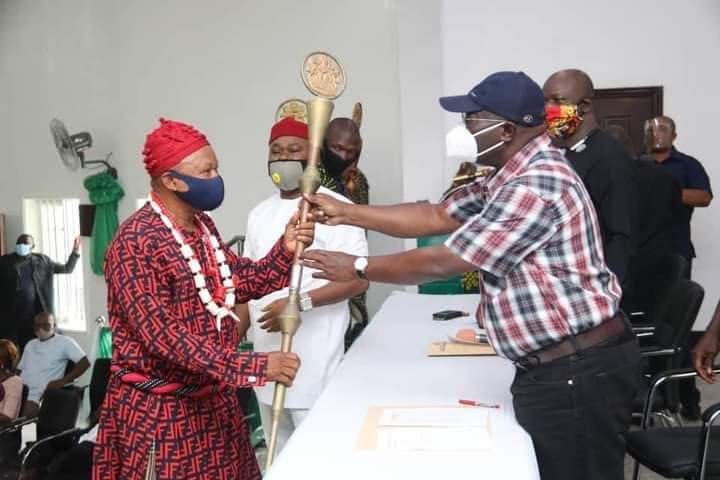 Dr. Ikpeazu enjoined the traditional rulers to serve in their various communities as custodians of the culture and traditions of the people and take responsibility for the security and economic development of their immediate communities.

“It is your duty to bring to government’s knowledge anything that will improve the lives of the people”, he advised, as he described the Ezeship stool as the fourth tier of government

He encouraged them to join forces with the government in sensitising the people and ensuring they implement the relevant COVID-19 protocols in order to break the chain of community transmission of the disease in the state.

In his remarks, the Commissioner for Local Government and Chieftaincy Affairs, Chief Sir Gabriel C. Onyendilefu, charged the new Ezes to ensure a peaceful and harmonious co-existence with members of their communities as well as work in tandem with the state government policies.

He said the event had marked the end of a painstaking journey of electing Traditional Rulers in their various communities.

Chief Onyendilefu implored the newly installed traditional rulers to attract and support developmental projects which align with the aspirations of the people and in line with government vision and programs aimed at ensuring peace and progress of the state. He further stressed the importance of being law-abiding leaders while residing within their various communities as it will enable them to see to the welfare of their subjects without rancour.

Speaking to newsmen, the Chairman of Abia State Council of Traditional Rulers, HRH Eze Joseph Nwabekee, charged the newly appointed Traditional Rulers to, above all, ensure the presence of peace and tranquillity in their various communities while maintaining the customs and traditions of their various communities. He encouraged them to devise means of settling certain community disputes before it escalates to chaotic proportions.

READ MORE:  Kwankwaso, Darlington Nwokocha, Bawas, others Condole with Chief Echeozo *As his late father is laid to rest

He said: “I urge them to keep to the tenets of this institution and be loyal to the government that has recognized them today”.

Continuing, he charged them to organise town union programs and help youths to achieve greater successes in their chosen legitimate areas of engagement as well as be receptive to the feelings of their people.

Eze Nwabekee urged them to shun high handedness and recognise the people in their communities as fellow human beings.

Speaking on behalf of his colleagues, the Traditional Ruler of Ahiaban’ubi Autonomous Community, HRH Eze Dr Okezie Amalaha thanked the Governor for the honour bestowed on them to bear their leadership prowess among their various communities. He promised that they will ensure peace reigns in their various communities and will do the needful to support and take government policies even to the grassroots level.

Bereaved, Mourners, Others To Be Quarantined For Burying...