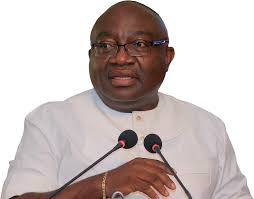 Sequel to the recent tragic auto crash at Ahia Udele market Aba, which led to the death of six persons, Chancellor of Gregory University Uturu, Prof Gregory Ibe has consoled the government and people of Abia state, praying that affliction should not rise a second time.

Lamenting the avoidable loss of irreplaceable Abia lives in such a gruesome manner, Prof Ibe particularly condoled with families that lost their members during the unfortunate incident.

This is following an auto crash at Ahia Udele market along River Layout, Aba, Abia State, yesterday, an incident which claimed the lives of not less than 6 persons.

The truck, as gathered was laden with containers filled with goods was coming from the ever-busy East street area but lost brakes at River Layout and rammed into the market killing 6 persons with tricycles trapped under the wreckage.

READ MORE:  Tragedy! How CEO of Ofoma Associates Ltd. Was Gunned Down At Azia-Mbosi By Unknown Gunmen

Reacting to the pathetic incident, the renowned academic entrepreneur, “I was really pained to hear the sad news of the avoidable death of some industrious and enterprising Abians who had gone to Ahia Udele market to hustle in order to provide for their families.

While praying for the repose of the souls of the victims of this unsavory disaster and quick recovery the of the injured, I wish to enjoin my brothers and sisters who lost their siblings to bear their loss with equanimity”.

Commending Governor Okezie Ikpeazu for his quick response on learning of the incident, Prof Ibe however urged the Abia state government to find lasting solutions to the menace of heavy duty vehicles ramming into markets and shops in Aba.

He suggested the promulgation of laws that will regulate the movement of heavy duty vehicles especially during busy periods, in addition to the construction of traffic medians to protect busy market regions.

In conclusion, he prayed God to continue to sustain his shield of divine protection and strong defence over Abia state.

It will be recalled that six persons were reportedly sent to the world beyond with many others injured when a heavy duty truck laden with a forty feet container rammed into the busy Ahia Udele market in Aba on Thursday morning.