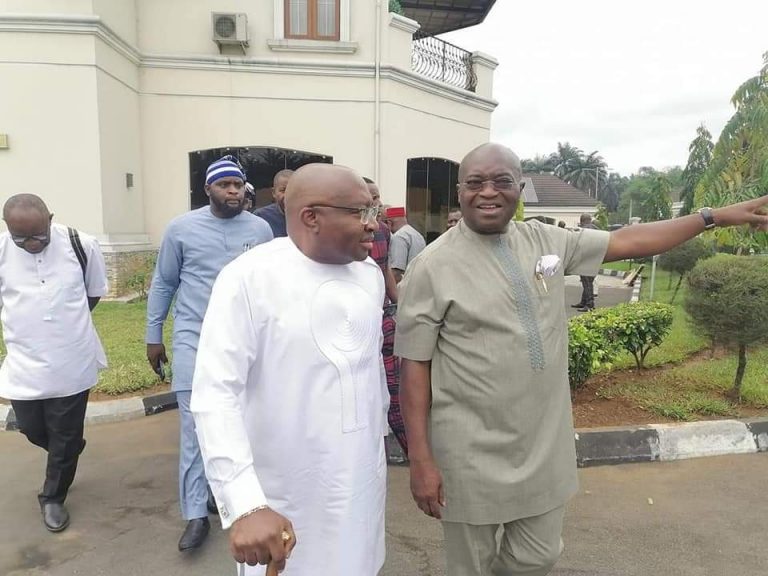 Professor Greg Ibe, a former People’s Democratic Party, PDP governorship aspirant, in Abia State, has accused the party in the state of a ploy to deprive the people of Abia North what is due them.

Prof. Greg gave this assertion when he officially dumped the ruling PDP for the All Progressives Grand Alliance, APGA.

He recounted on alleged plots by certain forces in PDP to deny Abia-North the opportunity of producing the party’s flag bearer in 2023 as the reason for his action.

Professor Ibe in a broadcast to the people of the state said he arrived at the decision to pursue his political ambition in APGA after wide consultations with Abians and his supporters.

He said he had made up his mind to push on with his gobernitorial ambition, and would not allow any obstacle by any party.

According to him: “In the last few days, I have been inundated with passionate calls and solidarity visits by Abians from the South, North and Central Senatorial zones charging me to champion the fight for the realization of the aspirations of our revered founding fathers and thereby actualize the dying wish of Ezeogo Anagha Ezeikpe, who on my last visit to him extracted a promise from me to ensure rotation of power to Abia-North in 2023, and a pledge to see to the legalization of rotation among the different zones of the state.

“Going forward, I believe that our state needs the services of a vastly exposed and widely experienced technocrat who will think out of the box, while leveraging abundantly available natural resources to stimulate our economy.

“Contrary to the retrogressive style of forcefully foisting on Abians reluctant and unprepared wannabes, the time has come to evolve a leadership recruitment process that encourages the emergence of the BEST and MOST COMPETENT people for the office of Governor.

“Umunnem Ndi Abia my pedigree is not in doubt. Even before politics I have been a key player in the task of developing our dear state.

“You will recall that it is my bid to leverage the vast experience and extensive global contacts I acquired over the years as lead consultant to the World Bank, ECOWAS Commission, UNESCO and many MDAs to fast-track development in our state, that motivated my desire to run for governor of our state in 2015 under the platform of the PDP.

“After drawing up a comprehensive blueprint aimed at achieving the desired objective of speedily transforming Abia, I preceded to procure both expression of interest and nomination forms.

“Subsequently, when my campaign organization commenced state-wide consultation in preparation for party primaries, I was prevailed upon by Abia elders, to step down on the premise that it was the turn of Abia South to be Governor. Convinced by the arguments put forward by our former Governor, Sen. T. A Orji, on the need to implement the content of ‘The Abia Charter of Equity’ document, I not only stepped down but also deployed my resources and organizing acumen to ensure the emergence of a PDP aspirant from Abia South in the person of Dr Okezie Ikpeazu as the candidate, and subsequently campaigned vigorously for him to become Governor of our State in 2015.

“In 2019, when the Governor, Dr Okezie Ikpeazu was to go for a re-election, he sent a delegation of political leaders and elders of Ukwa la Ngwa, led by the duo of Sen. Adolph Wabara and Elder Emmanuel Adiele, to secure the support of Abia-North.

“At a meeting hosted by me right here in my country home, it was unanimously agreed that if Governor Okezie gets re-elected to complete his second term, at the expiration of that tenure, power will return to Abia-North.

“In the same vein, the traditional rulers of Ukwa la Ngwa met with their counterparts of old Bende extraction and made a similar promise that if Dr Okezie is re-elected to complete his second term, power will return to Abia-North.

“The aftermath of these meetings led me and Ndi Abia-North, to mobilize men and materials to ensure that Governor Ikpeazu was reelected in the 2019 Governorship election, despite all odds.

READ MORE:  Why Credible Leaders Like Senator Orji Uzor Kalu Should Be Re-elected

“This is the zoning arrangement that produced the present state chairmen of PDP and other members of the State Working Committee. One therefore wonders why the position of Governor was not zoned at the same time but left in limbo.

“Fast forward to 2022 and every keen observer of developments in Abia PDP will definitely be worried. Shortly after I confirmed my intention to contest the 2023 governorship election on 9th March 2022 and subsequently commenced consultation visits, the PDP reneged on both stipulations of the Charter of Equity document and the earlier mentioned political agreement of 2019 by zoning the seat of Governor, first to Abia-Central and secondly, as an after thought, to Abia-North.

“Subsequently, signals began to emerge of sinister moves to deny Abia-North the opportunity of a fair contest through the ingenious strategy of anointing a preferred aspirant from Abia-Central, with the plan of delivering him to Umuahia Government House deploying the infamous power of incumbency.

“Sensing the looming danger, such critical stakeholders as Sen. Adolph Wabara, Sen. T. A Orji, Dr Eme Okoro and many Civil Society Organizations, outrightly condemned what they saw as a complete departure from the recommendations of the Founding Fathers of Abia, which the likes of our revered Ezeogo Dr Anagha Ezeikpe lived and died for.

“Unfortunately, their passionate calls for reversal of the obnoxious zoning policy was unheeded as we were insulted with the assertion that “Abia-North enweghi mmadu”.

“My brothers and sisters, ndi nwem, our elders say that when your co-hunter begins to mistake your legs for the feet of an antelope, then it is time to change your position.

“We also say that it is the tree that remains static even in the face of threats to hew it down. Faced with this challenge, I decided to embark on another round of consultation round the state in order to feel the pulse of our people.”

“Having therefore, conferred extensively with Abians at home and abroad, I want to reassert that my resolve to champion the speedy development and hence fast track the turnaround transformation of our state is unshakeable.”