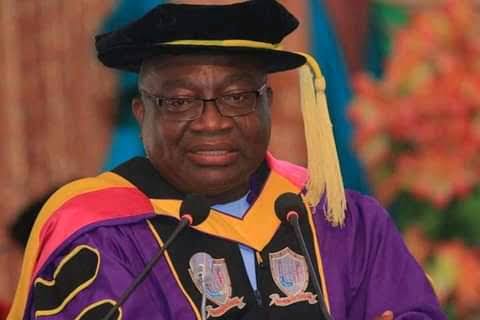 The Chancellor of Gregory University Uturu, Prof Gregory Ibe has formally announced his intention to contest the governorship election of Abia state in 2023.

Prof Ibe made the declaration during a consultation meeting with officials of Isuikwuato Local Government Council chapter of the Peoples Democratic Party (PDP).

Addressing PDP members from the 10 wards of the LGA, Prof Ibe recalled his earlier declaration and subsequent procurement of the statutory expression of interest form in 2014, stating that he was then advised to step down in respect of the party zoning arrangement which favored emergence of a governor from Abia South Senatorial District.

In his words, “You will recall that I was prepared to contest the 2015 governorship election and had already produced a detailed blueprint for the exercise, set up political structures round the state, procured branded vehicles and even purchased the expression of interest form from Wadata Plaza Abuja before I was advised to step down based on the decision of Abia Elders Council to implement the Charter of Equity by zoning governorship to Abia South Senatorial District.

I was subsequently counselled to wait till 2023 when it will be the turn of Abia North”.

Subsequently, he stated that he has since 2015 committed himself to supporting governments at all levels and the PDP by creating social welfare packages for the people while fine tuning his blueprint for 2023, asserting without equivocation that he is now more prepared for the crucial race than before.

According to Prof Ibe,” As a loyal stakeholder of the party, I have since the development of 2014 sustained partnership with the structures of PDP, proactively supported every initiative of the state government as a corporate citizen while building and enlarging capacity to do the party and the people of Abia proud in the office of governor come 2023.

Leveraging my extensive knowledge of political power dynamics, vast background in the world of corporate business, diplomatic skills acquired while consulting with international bodies and relevant experience garnered from being the largest private investor in our state, I consider myself sufficiently prepared by God to run for the seat of Governor of Abia. “Umunnem”, if the politics of 2023 must reflect the lessons learnt from the economic recession, COVID-19 and EndSARS protests, then we need someone who not only comes from the right political zone but a governor that can think outside the box, innovate and reinvent the state. I believe that I ticked all the boxes right.

Having thus declared this intention at my ward today, I will subsequently embark on state wide consultation visits to enlist the support and partnership of other stakeholders towards actualizing the project”.

Responding, the chairman of Achara Mbaugwu Ward 7 Hon. Chief Cyprain Obite congratulated Prof Ibe for his decision to offer himself to serve the state at the highest level of governance. He recalled that “Prof Ibe as a foundation member of the party has continued to offer different levels of assistance to the ward especially at critical times”. He therefore promised the partnership of the ward executive in realizing the vision.

Also speaking the chairman of Isuikwuato chapter of PDP Hon Charles Emenike appreciated Prof Ibe for keeping faith with the party through thick and thin, assuring that his gesture will be reciprocated at the right time. He promised to transmit news about Prof Ibe’s declaration to the party hierarchy.

Correspondents report that the event which was witnessed by officials from the 10 ABSIEC electoral wards of Isuikwuato LGA also featured solidarity songs and a session of intercessory prayers.