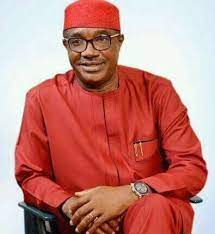 A socio-political group Greater Minds For Future says the achievements of the Senator representing Abia North, Sen. Orji Uzor Kalu, has exposed the failure of his predecessor, Sen. Mao Ohuabunwa,

The group without mincing words, noted that Mao Ohuabunwa could hardly make any tangible accomplishment other than empowering his constituents with frying pans and spoons.

The group applauded the achievements of the Senator Sen. Orji Kalu for attracting over 50 projects across the five local governments of the district since assumption of office.

According to the group, Sen. Kalu’s success has exposed the failure of his predecessor, Sen. Mao Ohuabunwa, noting that he did not achieve anything tangible apart from empowering constituents with frying pans and spoons.

The group in a statement issued by Chris Chuks stressed that the former Governor has done credibly well and has represented the constituency effectively.

According to the group, the era of distributing fry pans and spoons, which were the major achievements of Ohuabunwa was over in the zone.

The stakeholders condemned a statement credited to former SSG in the state, Dr. Eme Okoro, that Abia North has no voice in the Senate since Kalu’s assumption of office. The group urged Sen. Kalu not to be distracted with what it called cheap and calculated attempt to rubbish his good works, stressing that Okoro is hungry for money and power.

They said, “we shall not join issues with people seeking attention by all means. “Okoro and others are enemies of progress and as such we don’t take them seriously. “Kalu has done us proud and we shall continue to wish him well. “Ohuabunwa couldn’t fix the road leading to his community. He set us backward by 60 years.

“Kalu has touched lives across the board. “Our communities are enjoying social amenities attracted by the current senator. “We shall sustain our support for Kalu in his developmental strides”.

The group stressed that the former Governor will not lose sleep over the evil antics of Okoro, adding that the people of Abia North Senatorial district are solidly behind Kalu.