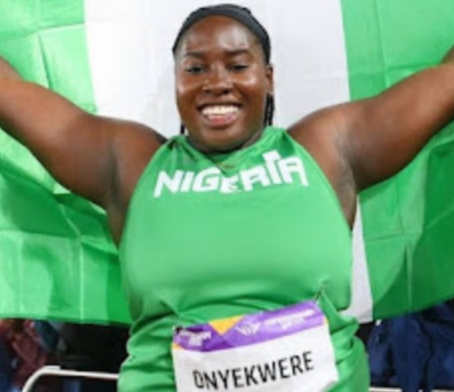 Rep Sam Onuigbo, member representing Ikwuano Umuahia North and South Federal Constituency of Abia State, has prided in the remarkable feat as achieved by Chioma Onyekwere, for emerging as the first Nigerian to secure a ‘Gold medal’ in the Commonwealth Games Women’s Discus event.

Rep. Onuigbo who applauded the pride of Igbo race and Nigerian nation in general, in his congratulatory message, wrote:

It gives me immense pride to congratulate one of my constituents, Chioma Onyekwere, for the remarkable feat of being the first Nigerian to secure a Gold medal in the Commonwealth Games Women’s Discus event.

“When she hurled that discus the incredible length of 61.70m at the Alexandra Stadium in Birmingham, Chioma had behind her the supportive aspirations, strength, and perseverance of women from Ikwuano/Umuahia North/South Federal Constituency, Abia State, and Nigeria”, the lawmaker representing Ikwuano/Umuahia North/South Federal Constituency stated in his congratulatory message to her.

He added that he is “… indeed proud of this achievement which has further underscored that given the opportunity and necessary support, our young ones will break boundaries and excel globally.

“On behalf of the good people of great Ikwuano/Umuahia North/Umuahia South Federal Constituency, I congratulate Chioma and wish her all the best in her future endeavours”, he affirmed