The executives who frowned at the alleged misrepresentation, among others as contained in the communique, which was signed by one Cletus Nwankwo on behalf of the group, described the act as “diabolical lies being orchestrated by devil incarnates and mercantile politicians who’s only stock in trade is to sow seed of discord.” 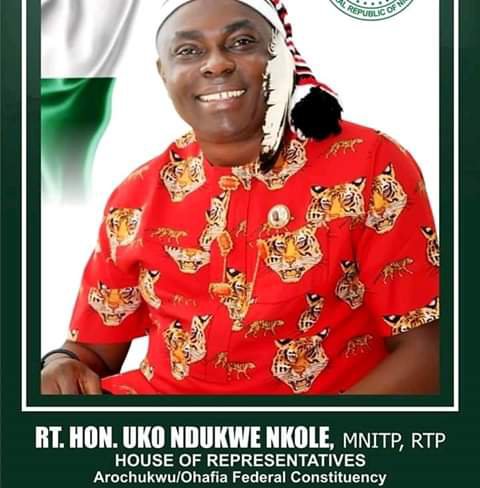 In a release signed by Hon. Sunday Odum Okemini, LG
Chairman and made available to newsmen, Monday, the party leaders stated emphatically that “Arochukwu LGA and across board are proud of the unprecedented giant strides of the Hon Nkole (Abaji Abam Ugwumba Aro) in the Federal Constituency whose benevolence extends beyond his immediate Constituency”, it said.

The attention of the PDP  Arochukwu LGA Executives and members has been drawn to the malicious statement purportedly issued by some impostors parading under auspices of Arochukwu PDP LGA alleging among other things Anti -party activities by Honorable Uko Nkole the Member Representing Arochukwu /Ohafia Federal Constituency in the discharge of his official functions.The communique was Signed by one Cletus Nwankwo on behehalf of the dissidents.

2.We would have Ignored the said publication in circulation but for clarity purposes we do hereby ask the general public to disregard such diabolical lies being orchestrated by devil incarnates and mercantile politicians who’s only stock in trade is to sow seed of discord.

3.Keeping the records straight PDP Arochukwu LGA under my watch as the Party Chairman has NEVER and shall never convene a meeting where such wicked and malicious decision was taken and as such cannot be true.

4.It is imperative to state clearly that the good people of PDP Arochukwu LGA and across board are proud of the unprecedented giant strides of the Hon Nkole (Abaji Abam Ugwumba Aro) in the Federal Constituency whose benevolence extends beyond his immediate Constituency.

5.And one wonders why a set of characters will choose to play with the only eyes of the  peoples democratic party in the entire Abia North in the National Assembly and by extension at the Federal level and also claiming to be PDP stakeholders . This itself is a show of indiscipline shylock and the highest level of stakeholders rascality exhibited by these characters.

6.On this note we call on all media houses and well meaning Nigerians not to give any iota credence to the malicious stories.As it can only exist in the warped imaginations of such charlatans.

7.It is very  important  to state that these characters have a pendency suit against the  Governor of Abia State and Leadership of the Party and hence cannot be said to be loyal party faithfuls nor have any capacity to speak for our party in the Local Government .

8. Finally the peoples democratic party has a constituted line of communications established in her constitution at all levels. At such any information emanating from any level without the imprimatur of the corresponding officer the chairman  is FAKE and should be Ignored at any time. Typified by the communique under reference.In view of the above I solicit for the media houses and general public to always confirm from me on any matters relating to the Party in Arochukwu Local Government Area.

9.Thank you and God bless.

Emancipation of Arm Forces of Nigeria: There shall...