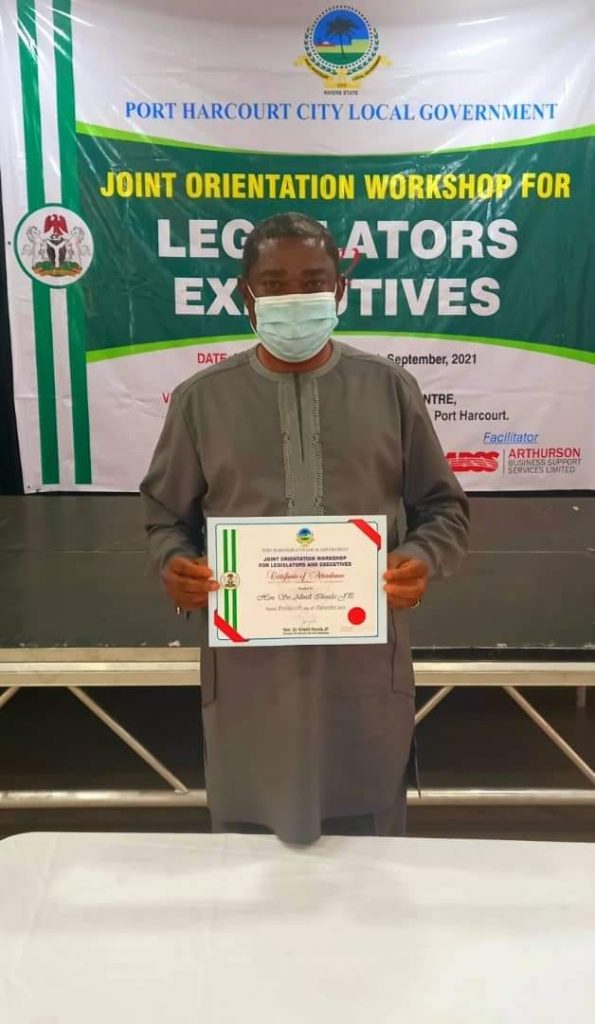 Sir Allwell Ihunda JP, the Mayor of Port Harcourt City Local Government Area of Rivers State, showing off his certificate of participation at a capacity building workshop organized for the Executives and Legislators of the Council.
Share
Facebook Twitter LinkedIn Pinterest Email
Kindly Share This Story

The Mayor of Port Harcourt City Local Government Area, Sir Allwell Ihunda JP has reaffirmed his unflinching confidence in the efficiency of the Legislators and Executives of the Council through capacity and productivity.

Mayor Ihunda who stated this during his closing remarks today, Friday at the end of the joint orientation workshop for Legislators and Executives of the Port Harcourt City Local Government, stated emphatically that, “I believe that the participants had learnt so much and now have alot to take back and enhance productivity.

“I believe that the capacity and productivity of the Legislators and Executives of the Council will greatly improve after the joint orientation workshop.”

According to a statement issued to Famous Reporters by Bob Abayomi
the Chief Press Secretary PHALGA, Sir Ihunda expressed immense gratitude to the facilitators of the programme, Arthurson Business Support Services Limited for their efforts, describing it as a wonderful job, while applauding the quality of resource persons who took turns to educate the participants on the workings of the Local Government system in the course of the two-days programme.

Moreso, the Council Boss thanked the Leader and members of the Legislative Council for their support and commitment to the success of his administration, adding, that the workshop has put the Legislators in shape for productive legislation and better representation of their people.

According to him, his full participation in the two days programme was in his quest to acquire knowledge “on how to aggressively tackle the flaws associated with Local Government Administrations.”

Continuing, he said: “I have always said that no man has the monopoly of knowledge, we must open ourselves to learning everyday.
I want to believe that we have learnt so much here, we have a lot to take back to the office that will improve our capacity and productivity”, Sir Allwell Ihunda said.

He appealed to the participants to ensure they put whatever they have learnt to practice for the betterment of Port Harcourt City Local Government.

Leader of the Legislative Council Hon Hanachor Noble Orlu thanked the Mayor on behalf of his colleagues and charged them to put in their best to deliver on their mandate as to whom much is given, much is expected. According to the Legislative leader, the Mayor has given them so much in just two months in office, and so there is need for them to remain partners in progress with the Executives.

In his goodwill message, the Leader of Obio Akpor Legislative Council, Hon Prince Achor Nna extolled Sir Allwell Ihunda for funding the programme, he said he attended on the invitation of his counterpart in Port Harcourt City Local Government Area.
He said on inuaguration both Legislative Councils resolved to work together in promoting good governance in their respective local government areas.

Highpoint of the event was the issuance of certificates to all participants by the Mayor Of Port Harcourt City Local Government Area, Sir Allwell Ihunda, who subsequently declared the workshop closed.

Meanwhile, the first session of day 2 of the programme was divided into two groups, hence the Legislators and Executives studied separately as they all later came together for the second session.

Below is a run down of activities: