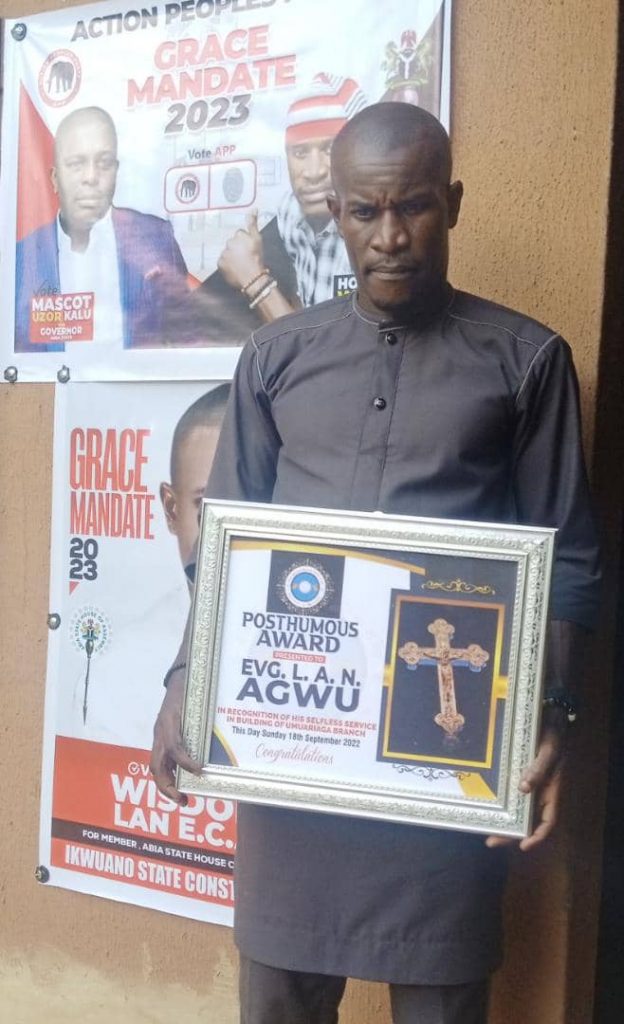 Presenting the award to Hon. Anyaragbu, His Eminence Apostle General Emmanuel O. Agomuo, congratulated late Anyaragbu on his exemplary life while on the earth.

He described the deceased as a devout Christian and active member of the church and had shown immense dedication during his lifetime, as he urged the receipent of the award and other members of the family to endeavour to emulate their late father’s footprints, “so that you would be remembered even when you are gone”, he admonished.

Responding, the emotional saddled Hon. Anyaragbu thanked God and the church for the recognition done in to his late father.

“Frankly, I am short of words and I wish my late dad were alive to witness this great honour. I want to say a very big thank you, His Eminence and for remembering my father and honouring him even while he’s gone from us, the Most High God shall never forget to reward you and the entire Church.

“I do not take this for granted and I am sure my father must be smiling wherever he is right now”, he said.

Anyaragbu used the medium to appeal to the congregation on the importance of living a good life and impacting on others, saying “this honour today is indeed a proof of that we truly shall be remembered by what we have done. So, I therefore, urge everyone of us, including my family to always manifest good fruits so that posterity will always favour us and our generation”.