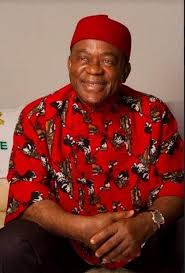 The Chancellor of Gregory University Uturu Prof Gregory Ibe
has described the former Governor of Abia state Chief Theodore Orji as a political institution and father of equity in Abia state.

Prof. Ibe lauded T. A. Orji for his sterling qualities and outstanding personality.

According to Prof. Ibe, the commendable deeds of Ochendo during his administration would never be consigned to oblivion.

In his words: ” I thank the Almighty for the gift of Chief T. A. Orji to our state, who in the process of emerging the third civilian Governor of Abia became a political institution by achieving the feat of not only winning an election with a new political party but did so from the discomfort of unjust incarceration in a prison.

“Most especially I know posterity will surely accord Ochendo a good place in history for his good legacies while in office as Governor, paramount of which is his insistence on doing the right thing by adopting the ‘Abia Charter of Equity’, a document authored by the founding fathers of our state, as a template for equitable, fair and just distribution of political power from one senatorial zone to another and from one district to another”.

Continuing, he said: “I therefore join millions of our people in praying God to strengthen our leader as he marks this enviable and accomplishing milestone while wishing him well in years to come”, he concluded.