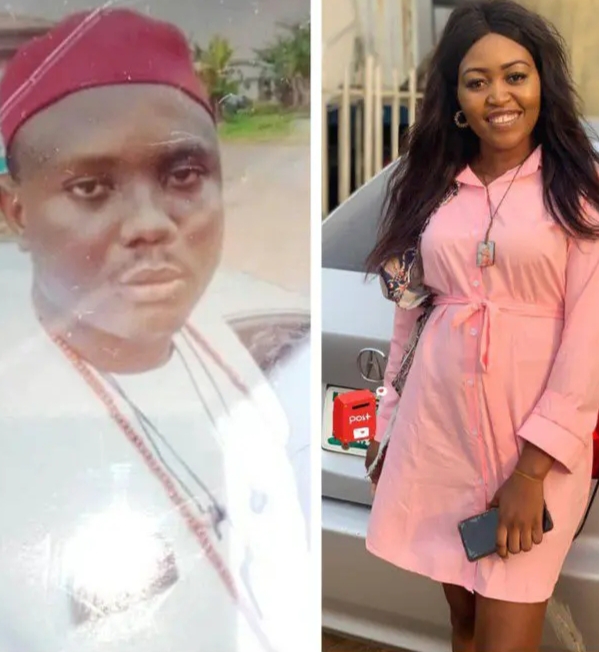 Autopsy shows actual cause of Aigbe’s death
*Remember Enogie was accused of murdering his lover, Aigbe

Autopsy report has confirmed exactly what resulted in the untimely death of a 26-year-old woman, Faith Aigbe whose lifeless body was found in a vehicle belonging to an Edo traditional ruler,

Recall a viral report on the internet involving the demise of one Faith, wherein the Enogie of Uroho in Ikpoba Okha Local Government Area of Edo State, Iguodala Ogieriakhi was fingered.

The traditional chief, had earlier pleaded innocent, maintaining that Faith rather who was eight months pregnant for him had died in in an attempt to terminate their baby.

However, the deceased’s family members had bluntly denied that their daughter was ever pregnant, while insisting that it was a murder case, in which the Enogie was held responsible.

Meanwhile, the result of the Autopsy which was conducted on the body by some medical experts has exonerated the traditional ruler, as the lady had reportedly died of Ruptured Ectopic Pregnancy.

This is even as the traditional Chief was initially accused of beating Faith to death after her corpse was found abandoned in his Lexus 330, at the premises of the Edo Specialist Hospital.

The police immediately arrested the Enogie and had him detained, while the Command called for autopsy to determine the actual cause of death.

The Edo State Police command on Wednesday, September 22, released the official autopsy of the late Aigbe.

Spokesman of the command, Bello Kontongs, in a statement said the cause of death is Hemorrhage Shock, ruptured tubal Ectopic gestation with massive Hemoperitoneum.

“The Edo State Police Command wishes to inform the public that the autopsy of one Faith Aigbe who died in the house of her boyfriend, Enogie of Uroho, Iguodala Ogieriakhi,” the statement read.

“He was suspected to have killed his girlfriend who was eight months pregnant. But after series of investigation and the autopsy from the University of Benin Teaching Hospital (UBTH) reveals the cause of death and signed by Dr. Wilson Akhiwu

“The autopsy result reads: That the cause of death is Hemorrhage Shock, ruptured tubal Ectopic gestation with massive Hemoperitoneum. These are the things that the medical personnel said led to her death.

“So we are using this opportunity to let the public know the cause of the death. Based on this report, it shows that the Enogie may not have been culpable of the crime the family of the deceased accuse him of committing and the police will consider him for bail.”