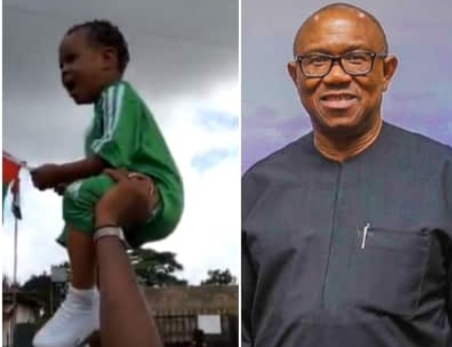 The viral video of a little girl identified as Chioma Success, has awarded her an international recognition.

It could be recalled that little Success was seen dancing profusely and with so much enthusiasm with four million other
Nigerians who rallied in solidarity with Mr. Peter Obi, the Labour Party presidential candidate in the 2023 general election, to mark the country’s 62nd Independence Day Celebration.

Dressed in a pair of Jessy, depicting the Nigeria’s green white green colour, and matching matching confidently among youths who poured out into the streets of Nigeria, to display their support for the former Anambra State Governor.

The little girl, Chioma Success, caught the attention of all to her admiration when she was lifted up by another fan into the air with the flag of Labour Party which she swung to the admiration of all.

According to a Facebook post by Chris Onwugbolu, “baby Chioma and mother received a well furnished flat and $5,500 from OBIdient diasporans & 100k naira, equally received scholarship to University level.

“Money is for the mother to start a business. Baby Chioma is the poster girl of Labour Party Presidential campaign.

Meanwhile, in a tweet on Sunday, October 2, Obi made Success the poster child of his presidential campaign, noting that she represents all Nigerian children.