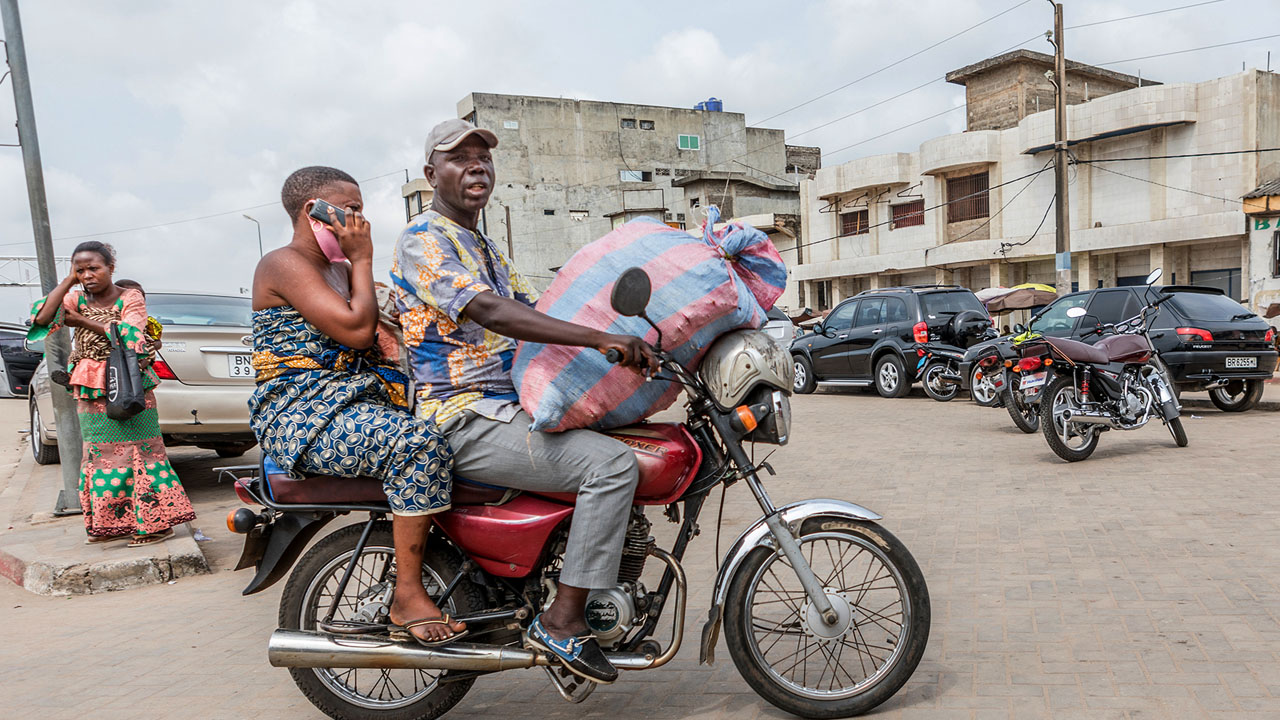 A man and a woman ride a motorbike, on December 17, 2020 at the Benin-Nigerian border city of Krake, one day after Nigeria announced the lifting of borders’ closure. – Nigeria is lifting the closure of borders with neighbouring Benin and Niger which it imposed in 2019 to curb smuggling of rice and other commodities, the government said on December 16, 2020. The closure had a major impact on Benin, a key exporter of foodstuffs to Africa’s most populous country via its port of Cotonou. (Photo by Yanick Folly / AFP)

The main border crossing between Benin and Nigeria was buzzing following the announcement it would reopen after more than 16 months, relieving thousands who suffered from the closure.

Nigeria said Wednesday it was lifting the closure of its borders with neighbouring Benin and Niger imposed in August 2019 in a move it said would curb the smuggling of rice and other commodities and bolster domestic agriculture.

Early Thursday, traders, taxi-drivers and goods carriers amassed on both sides of the Seme-Krake border, located along the Atlantic Ocean.

“I am so emotional I want to cry,” said Jacqueline Watchinou, a reseller who had to pick up work as a house cleaner to support her family.

“Last night we had a party to celebrate,” she said, hoping the reopening would put an end to her financial troubles.

In the town’s small restaurants, people cheered joyfully, as women nearby draped in colourful clothes brought wooden chairs to sit on and wait.

A handful of people were able to cross but “this morning, Nigerians apparently stopped letting people through,” said a worried trader, Brice Biokou.

A Beninese border official told AFP they were waiting for “an official notification” to fully reopen.

Nigerian President Muhammadu Buhari stunned his country’s neighbours when he unexpectedly closed the borders, saying the time had come to crush the contraband trade.

Major impact
The unilateral move was criticised for violating commercial and freedom of movement treaties signed under the Economic Community of West African States (ECOWAS).

The closure had a major impact on Nigeria, heavily reliant on imports to feed a booming population of some 200 million people.

Huge quantities of frozen chicken, rice, fabric but also cars that arrive in Cotonou are shipped or smuggled into Nigeria.

For its part Benin relies heavily on cheap oil imports from its neighbour, sold across the country in jerry cans along the roads.

The shutdown also had an impact on traders in Benin, a key exporter of foodstuffs to Africa’s most populous country.

With a recession on its hands, falling oil prices and an economy hit by the coronavirus pandemic, Nigeria was under pressure to reopen its borders.

“The remaining borders are directed to be reopened on or before 31st of December, 2020,” Ahmed said in a statement.

Under the new instructions, the ban on rice and poultry imports remains in place.

But even so, many in Seme-Krake, are hopeful that business will soon resume.

“I’m eager to start shipping my goods to Nigeria,” Midonignon Agbogninoi, who has been transporting goods across the border for 22 years.

“I’m thrilled. I’ve heard everything would be in order by the end of the day.”

Women who died inside Mercedes that rolled off...

Charlotte takes food to needy as she turns...

Congress moves as one to fight coronavirus as...