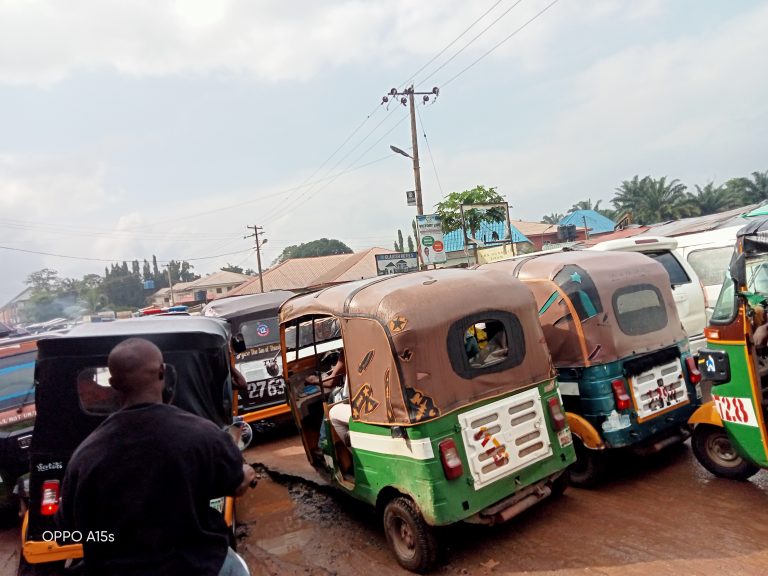 Students of Michael Okpara University of Agriculture Umudike, (MOUAU) are protesting along Ikwuano/Umuahia- ikot-Ekpene highway, over the deplorable state of the popular road leading to deaths of residents, have shut down the highway.

Consequently, motorists coming from Ikot-Ekpene can no longer transverse to Umuahia town neither can those operating from the town go beyond ABSU Extension, as both are compelled to pull down at the spot to avert the wrath of the aggrieved students.

This is following the death of one of their female colleagues, yesterday on the said road which has reportedly proven a death trap for road users.

The accident, as gathered occurred when a fully loaded Trailer regrettably had a brake failure around Industrial Market (Timber), crushing a final year student of MOUAU, (name withheld), who was trapped in traffic inside a tricycle (Keke-Napep).

This, therefore, has prompted passengers to alight at the spot, as they will have to sneak through the crowd to where they could board a second bus or tricycle (Keke- Napep).

Meanwhile, an eye witness who spoke on anonymity has this to say:
The accident happened yesterday’s evening. The young girl who was in a Keke returning to school from the town was crushed by a fully loaded trailer.

“The trailer fell break at the Industrial Market (Timber) and the girl probably could not escape from the Keke alongside other passengers. Maybe she was at the middle of the Keke.
It happened in hold up, a fully loaded trailer lost break and crushed the final year student of Michael Okpara University of Agriculture Umudike.

“The trailer scattered the girl’s body beyond recognition. It was only her co-passengers that were able to spot her because they were together else no body could have been able to identify her.
I wonder what the poor mother of this girl will do.”

Famousreporters.com confirms that the road has been in a pitiable state over the years, thus leading to the several death.