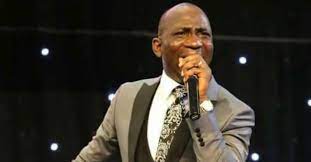 Pastor Enoch Adeboye, the General Overseer of the Redeemed Christain Church of God, (RCCG) has prided in the Governor of Benue State, Governor Samuel Ortom.

The renowned clergy made this remark today, Sunday, at the 25-years anniversary of Dunamis International Gospel Center Headquarters in Lugbe, Abuja

Attendance at the epoch making event which doubled as a Thanksgiving service were Pastor Folu Adeboye (Mummy G. O), wife of Pst. Adeboye, Governor Samuel Ortom, among others.

Pst. Adeboye reiterated that he and other real men of God were earnestly praying for Governor Ortom, and urged him not to relent in his good works, evident in the state.

Addressing him as his son, Adeboye enjoined him to discard all distractions and continue to do what he knows best to do.

He went further to state that Exceeding Abundant Grace entailed grace upon a man’s life inspite of his flaws.

Pst. expressed immense joy over the exceeding abundant grace of God upon the church since inception, as he prayed for more of God’s grace.

He recounted that his prayer had been for his offsprings to excel and prosper more than he in the Ministry, describing the exploits of Dunamis International as generational.

“Abraham was great, Jacob was great and Isaac was exceedingly great, I thank God that even in my lifetime, I could see this happening. So, rejoice with us.

“I rejoice from the bottom of my heart because this is an answer to my prayer because greatness is meaningless if it’s not generational.

Earlier, the founder and President of RCCG commended the senior pastor of Dunamis, Dr. Pst. Paul Eneche and his amiable wife, Dr. Pst. Mrs. Betty Eneche for their doggedness in carrying out effectively the works of God as committed to their hands.