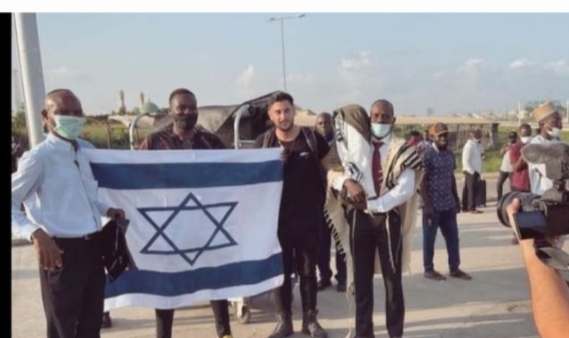 The Sefer Torah Has Just Touched Down In Igboland (BiafraLand) From Jerusalem #Israel.
as part of the restoration plans by IPOB Leader Mazi Nnamdi Kanu

Reportedly, the arrival of the said Sefer Torah is an indication of the coming of Biafra nation.

Evidently, this is in fulfilment of the prophecy of Mazi Nnamdi Kanu, in one of his broadcasts.

A die-hard member of the Indigenous People of Biafra, IPOB who would not want his name mentioned, has posted on his Social Media handle, explaining the strange arrival of the proposed Sefer Torah.

READ MORE:  Breaking: Nigeria May Collapse in 2022, Die in 2023 If…
…As OYC reveals imminent conspiracies against Ndigbo

Recall that Kanu had in one of his broadcasts said that “anyday you see the Sefer Torah in Biafraland just know Biafra has come, this signifies a lot and puts the Nigeria Government on it’s feet.”

Literally it means Israel now have every right to openly defend Biafra as a common Jewish brother nation, expect a statement from Israel soon regarding Kanu’s illegal abduction.

“Israel Stand with #Biafra in Good and in Bad!!

Biafra Stand With Israel in Good and In Bad!!”, He exclaimed.

Meanwhile, Sefer Torah, according to the leader of Jewish community, in Abuja, Shlomo Yaakov Maduakor, is the most sacred book of the Jews, which contains the first five books of Moses, hence Genesis, Exodus, Leviticus, Numbers, Deuteronomy.

He further explained that Sefer Torah is the holy book the Jewish ancestors had left behind for the younger generation.