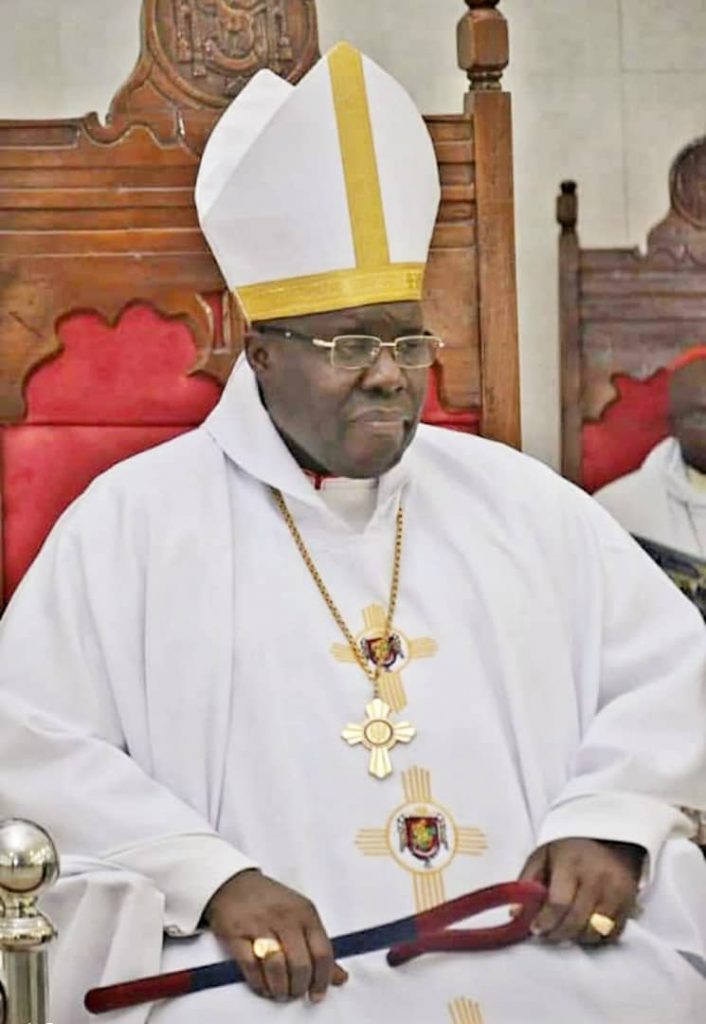 Most Rev. Dr. Chibuzo Raphael Opoko, the Methodist Archbishop of Umuahia and Bishop of Umuahia has, amidst indignation, debunked
President Mohammed Buhari’s derogatory statement which likened the Igbo nation to as “a dot-in-a-circle”, saying it is unpresidential to say the least.

Rev. Dr. Opoko, described bluntly Buhari’s pejorative choice of simile as inappropriate of him as a President, being a father of the entire Nigeria nation.

“There are people in the area who voted for him during the election. They deserve better than what they are getting from him. The President’s words were laden with threat, when he stated he will unleash the army and Police on the freedom agitators”, he pointed out.

It would be recalled that President Mohammed Buhari had, during a recent interview with Arise TV, likened the Igbo nation as “a dot in a circle”.

This perceived derogatory use of simile was preceded by a question about separationist agitations in Nigeria’s South-East, as PMB arrogantly responded, saying that, “IPOB is just like a dot in a circle. Even if they want to exit, they’ll have no access to anywhere. And the way they are spread all over the country, having businesses and properties. I don’t think IPOB knows what they are talking about. In any case, we say we’ll talk to them in the language that they understand. We’ll organise the Police and the military to pursue them.”

However, this disparaging statement, evidently seemed vexatious to the entire Igbo nation, who could not sit down and watch PMB ‘drag their image through the mud’, as they unhesitatingly took to the Main Stream Media and various Social Media handles to refute same.

READ MORE:  Strike continues until our demands are met, JUSUN Threatens **Say Ebonyi is the only state that does not pay CONJUSS **I challenge the state government to refute any of our claims... Vice President

To this end, the revered Methodist Archbishop, in an exclusive interview with Famous Reporters, stated point-blank that Mr. President’s belittling assertion did not by any manner or means depict him as a true father of a nation, pointing out that it is not presidential at all.

“It is not presidential because all the persons in this country are supposed to be his children as he is supposed to be the father of the Nation. They have not seceded so he’s still their father. So, what he has to do is to find other ways to engage in dialogues with the leaders of every group involved in the agitation. This is because it’s not only in the South East that we’re having the challenges. We are having the challenges all over the country; the South West etc. We have challenges in the North East, in the West, and not just in the East. So, what is happening?

“All we need do is to continue to pray to God so that there will be harmony, peace and unity in the nation, because without all these factors, Nigeria cannot attract investors from outside and as such, there cannot be any investment, unless when there is peace. So, they must device a means to deal with the situation. The various reports circulating of extra judicial killings coupled with the massacre, hacking of human beings to death devalues our Nation”, he wailed.

On the threat to deploy the Military and Police against the freedom agitators, the renowned clergy, without mincing words queried the interest of the Buhari led government towards the Fulani herdsmen and Boko Haram insurgents and unknown gunmen who have been hacking lives out of many innocent Nigerians, as he wondered why that had never been mentioned as a bone of contention by the present administration.

“In the nation, there are still people who are killing Nigerian citizens, slaughtering people and nothing has been done. So, what is the President doing about that? Will he also say he will talk to them in the language they will understand? Let the President talk to the Bandits, the herdsmen, Boko Haram, and other criminal elements in the language that they will understand? I am honestly at a loss. In any case my job is simply to pray for this nation and sue for peace because this is not the Nigeria of my dream. The insecurity in the land is so much that people have to exercise care first before they could come out of their homes.

“So, what he has to do is to find other ways to engage in dialogue with the leaders of every group involved in the agitation in the country.

“All we need do is to continue to pray to God so that there will be harmony, peace and unity in the nation, because without all these factors, Nigeria cannot attract investors from outside and as such, there cannot be any investment, unless when there is peace. So, they must device a means to deal with the situation.

“Let the President convoke a Security summit of all across board to deal with the continous spate of insecurity”, the Cleric appealed.