Comrade Chinedu Ogah: The Vitality Of Sociopolitical Growth in All Progressive Congress … I Don’t Sing Praises For Politicians 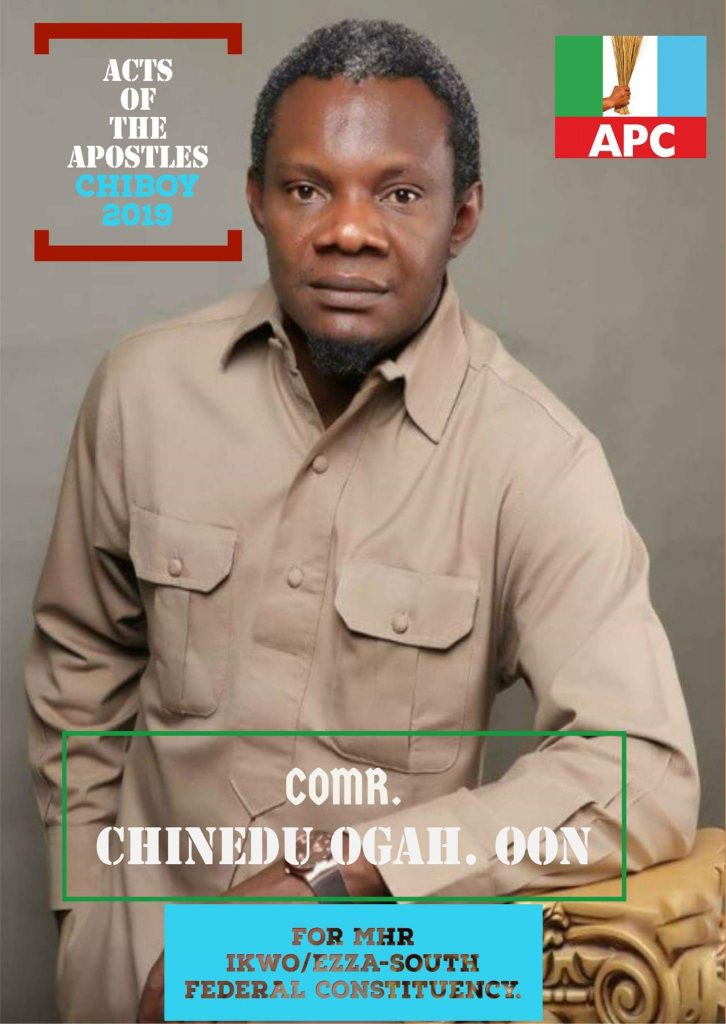 Hon. (Chief) Comrade Chinedu Ogah, OON is not only a trailblazer, but a religion. He evidently has the je-ne-sais-quoi that distinguishes him from other philanthropists, legislators, politicians, leaders and affluent men, and thus has bred the sudden impressive increase in the number of the members of the All Progressive Congress (APC) in Ebonyi state. I know after reading this article, many things would come to mind: some disgruntled elements would allege that I was contracted or bankrolled to write this; some would adduce that I have turned a praise singer while others would unintelligently and hollowly say that I’m seeking attention. These purported negative perceptions and/or misconceptions abound in our corrupt state full of corrupt minds, because we don’t believe that one cannot spontaneously tell the truth without inducement. But I know, even if truth is buried, it must explode one day. Anyone who has been reading my articles or posts on the social media know that I don’t sing praises for the politicians. As an unbiased critic, I criticize a leader when he goes wrongly and also pour encomiums when he gets it aright. Chinedu Ogah doesn’t know me in person. I have never been favoured by him. We are not from same clan. He’s not even representing my constituency. It’s good you know all these before you crucify me on ground of been induced. And it behoves me as an advocate for good governance and a critic who have passion for research and findings to write this article so as to unfold the secret behind the current increase in number of APC members in Ebonyi so that, other unscrupulous, treacherous and egocentric politicians would learn. 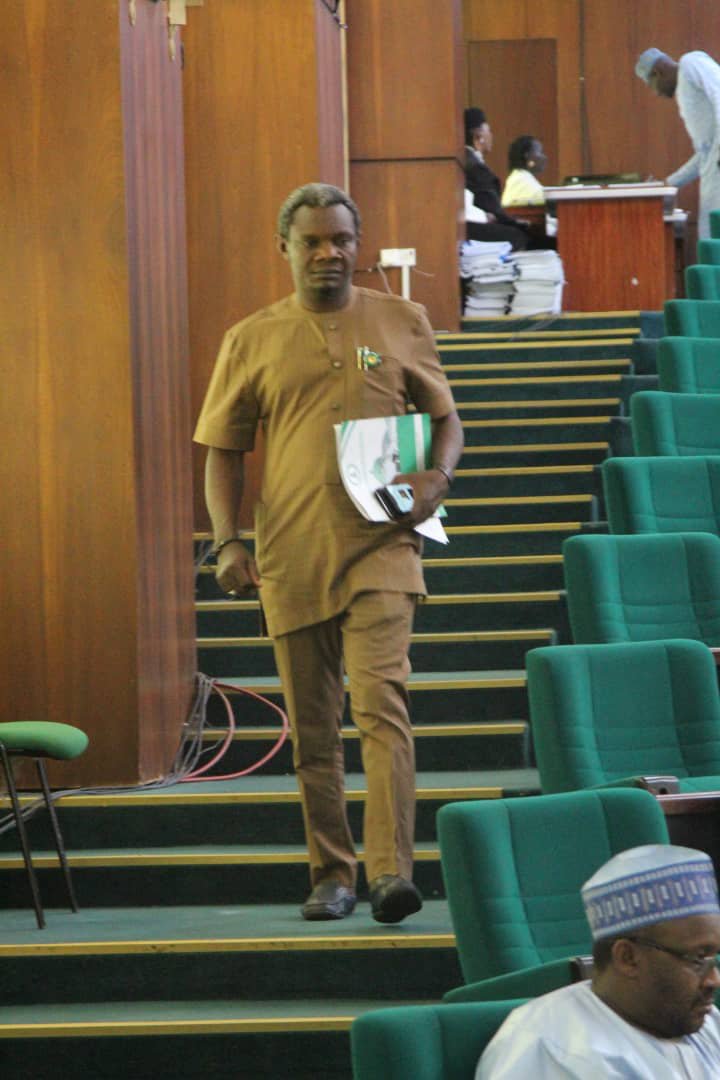 Comrade Ogah is the Member representing Ezza South/Ikwo Constituency in the National Assembly (House of Representatives) under the APC. And he’s the only APC member holding elective position in Ebonyi. A vibrant youth cum grassroot mobilizer. This quintessential philanthropist and altruistic politician has really performed, such that, writing about his achievements or good works would take time. No matter how fast, technical, innovative and painstaking you are in writing, you can’t finish it within months. Where would you even start? Is it more than 10 bills, petitions and motions he has sponsored and moved as a lawmaker will you write on? Is it on bridges he has successfully constructed will you write? Is it on boreholes he has sunk will you write? Is it on transformers for electrification he has donated to the people will you write? What about thousands of Ebonyi undergraduates he has paid school fees for? Is it on widows he has assisted will you write? What about the succour he has given to indigent ones across the state? Is it hundreds of motorcycles, tricycles and some cars he has gifted the people to ease their sufferings will you write on? What about the thousands of children he had paid for their WAEC? Is it on thousands of youths he has empowered with skill acquisitions will you write? More importantly, is it more than 200 youths he has given federal jobs will you write on?
Indubitably, Chinedu Ogah has paid his dues and thus written his name in gold. Among all the above mentioned achievements of his, the federal jobs he has been sharing like biscuits to the youths caught my attention. This is what is called real human development or empowerment! Interestingly, he knows no bound in giving the jobs, hence some of the beneficiaries are from different local governments outside of his constituency. When other politicians are busy going from hotels to another, mingling, commingling and sleeping with prostitutes, Chinedu Ogah is always having a sleepless night where he’s going from one ministry, parastatal and institution or the other looking for where to influence federal jobs for the unsuspecting and jobless graduates floating in the cesspool of hunger.

Recall that Comrade Ogah is a first-timer in the National Assembly and had never held any elective political position in the past (not even a ward councillor) and he’s doing all these wonders. Without mincing words, we need more of the likes of Chinedu Ogah in our political enclave.

However, Chinedu Ogah as a mere human, may not have got it all correct, hence he has his flaws, but has put smiles (happiness) in the faces of the greatest number of people, and this approximates to the teaching or philosophy of a British philosopher, jurist cum social reformer, Jeremy Bentham (1748-1832) who averred that right course of every action vis-à-vis legislation, is the one that provides or produces “the greatest happiness of the greatest number of people”. In corroboration, Peter F. Drucker said (and I quote), “effective leadership is not about making speeches or being liked; leadership is defined by results, not attributes. In other words, greatest number of the constituents in particular and Ebonyians in general, are happy with the effective and selfless representation of Comrade Ogah, whereof the above achievements of his are the results.

After the 2019 general election in Ebonyi to which the People’s Democratic Party (PDP) manoeuvred the outing and clinched all the elective positions in the state, some gullible and unreliable members of the APC gave up and decamped to the PDP. And the APC was gradually going into extinction or oblivion. Lo and behold, Comrade Chinedu Ogah who was robbed of victory at the polls, went to the court and reclaimed it, eventually. This reclamation alone shook the whole of the state in favour of the APC. The then sick party started recuperating in the state. Comrade Ogah is not even up to a year in office and his good works reverberate all the nooks and crannies of the state. Because of him, many who left the party, APC are back. And many PDP remembers have dumped the party for the APC. In Ikwo local government where Comrade Ogah come from, a month hardly pass by without hundreds of the staunch PDP members defecting to the APC. Defections upon defections! Ikwo is the strength of the APC in Ebonyi, for now, take it or leave it. And many whom I have interviewed, disclosed that the good works of Comrade Ogah attracted them to join the APC. I know of many of my PDP friends from other local governments who have also told me that they have declared for the APC because of this same man, stating that he has won their hearts.

Days are gone when you preach what you don’t do and expect the people to follow you. You don’t tell somebody to start going to church when he’s hungry. The best and easiest preaching you can give to such person is, to give him food and he will willingly follow you to the church. As a Christian, the kind of lifestyle you exhibit would attract those around you to either declare for Jesus or remain unbelievers. Days are also gone when as a politician, you go about hoodwinking the masses with empty promises during electioneering campaigns. It’s time to campaign for supporters through results (your good works). We are not all conquered people, and political consciousness is gathering momentum daily. A request “vote for me” now goes with the question “tell us what you have done for the people?”

Nigerian politicians and aspiring politicians have now seen the best way of seeking the supports, mandates or votes of the people or winning souls for the party without shouting or organizing a political rally.