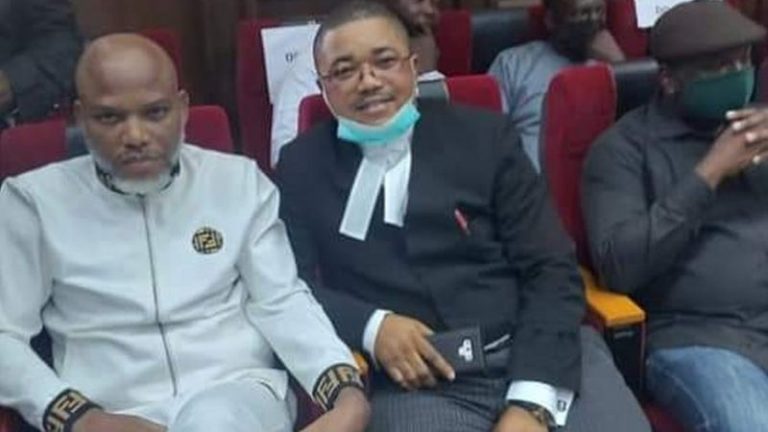 Little will anyone doubt that Ifeanyi Ejiofor would raise a voice regarding Sen Orji Kalu’s visit to Nnamdi Kanu much as he was not privy to the conversations that went on between the two brothers who ‘agreed to meet behind him (Bar Ejiofor)’. Even as they discussed as “Umunne”.

Having gone viral is the display of confusion by Ejiofor who is ranting about Sen Orji Kalu not ‘waiting for him’ to arrive before seeing his client, Nnamdi Kanu. But the question should be, why has Ejiofor always played down on the affairs of his client, Nnamdi Kanu? Having abandoned the IPO leader in the middle of the last court session for media address, this time he has come behind the scheduled time, 2 pm and is blaming Sen Kalu who kept to time and went ahead with the business of the day.

To the kernel of it. Ejiofor is insisting that the president got involved in the passage Sen Orji Kalu had before he could meet with Nnamdi Kanu, his client. How could that be?

When did Nnamdi Kanu, a prisoner, come under compulsion to see any visitor? Was he stripped of his freedom to privacy? Would he be violating any law if he had said, no, I don’t want to see Sen. Orji Uzor Kalu without my lawyer? Can it be that Nnamdi Kanu is weary of Ejiofor hence his express acceptance to see Sen Kalu behind him?

It is unimaginable the level of reasoning Ifeanyi Ejiofor displays. He goofs a lot but for him to infer that since Sen Orji Uzor Kalu had the presidency aide him to see Nnamdi Kanu behind him, the same presidency had a romance with Nnamdi Kanu to fall into the deal thereby sabotaging whatever he has with his lawyer? What is the viewpoint of Ejiofor?

Making a mountain out of a molehill is the misinterpretation of Sen Orji Uzor Kalu’s statement that Nnamdi Kanu has an insane supporters. Excuse me, who wouldn’t have believed that Ejiofor would have reasoned beyond public stunting to understand that the word ‘insane’ could mean mammoth crowd? Where is the intelligence of Ejiofor?