Ebonyi Govt Respect The Sanctity Of Ancestral Homes, Community Cries Out
*demand immediate withdrawal of security agents
… Only those involved in malicious damage were arrested…Govt

Indigenes of Umuchima community, in the Ohaozara Local Government Area of Ebonyi, on Saturday, protested the alleged grabbling of their communal land by the Ebonyi State, without their consent.

Indigenes and residents of the area alleged that the State Government was hiding in the guise of coming to the community to set up some projects for the people to seize their land, which according to them, was given to them by their forefathers.

Carrying inscriptions such as, “No to Fulani settlement at Enuebor Umuchima”, “Ebonyi State Government respect the sanctity of ancestral homes,” and Save, rebuild our ancestral homes you destroyed”, the people marched round demolished communal landmark and ancestral homes, claiming that over 20 houses had been destroyed in the area, while about 9 persons had been arrested as a result of the development. 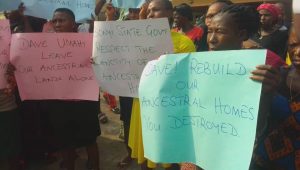 They called for the immediate withdrawal of military personnel from the community, to avoid further breakdown of law and order in the area, alleging that they currently lived in perpetual fear of miem and intimidation by security agents, deployed by the authorities, in the community.

“We are calling for peace and the right thing should be done. You need to get the consensus of the people, their approval over issues like this and resettle, when necessary. The Government should follow due process and the people that have been illegally arrested and incacerrated without fair hearing, should be released. Also, wanton arrest and intimidation of citizens should cease.”

Another protester and a native of Umuchima, Mr Ezinwa James, told our Correspondent that they were protesting the invasion of their ancestral homes and farmlands by the government, saying peace had left the area, since 2020 when the State Government allegedly invaded the area, scrambling for a communal land.

According to James, “The Ebonyi State Government just entered the communal lands and started ceasing them, claiming it was going to site some projects in the area. This was in 2020 and till date, the Governor didn’t consult anybody, not even the traditional leader of the community. This is sheer desecration of respected and established traditional institutions. This is unacceptable and we cannot take it.

“People’s homes, over 20 of them had been demolished in the area and there’s ongoing decoration of sacred places. This is evil. Our young men and women have been arrested, and aside this, people’s farmlands are destroyed. There is now Jungle Justice in Umuchima and is only God that can help us. As we speak, many of us to longer sleep on our homes, for fear of midnight arrest and abduction.”

Onuorah said, “This is not how to do things, even if you are well-placed. You should try and respect the right of others. The Government is using a few people (politicians) to get at the conmunity people. But we will not allow them. We know them and we will continue to reject their plans.”

FamousReporters reports that the Ebonyi State Government and the people of Umuchima have been enmeshed in disagreement over alleged seizure of their land by the government. No fewer than 9 persons have been arrested in the area, while about 20 houses have been destroyed.

But the Ebonyi State Government, in a swift reaction, denied the allegations and said what happened in the community, had nothing to do with either it or its officials. It added that those, who were allegedly were involved in malicious damage.

The Commissioner for Information and State Orientation, Mr Uchenna Orji, stated this in a telephone interview with our Correspondent, in Abakaliki, on Sunday.

“And that is the issue of Federal Low-Cost Housing, which the civil servants and indeed the indigenes of that place will benefit. Full consultations made, certification made and consent given by the entire leadership and the good people of the community, including youths. Long ago, there was a groundbreaking of a flag-off of a federal housing project in that place, that will bring about social security, that will bring about so many economic activities in the place. That will enhance the economic activities of that place and the state in general and further appreciate the land value in the place, seeing that it will warrant so many other anxiliary activities to the place.

“So nobody raised any alarm, but just a few disgruntled people in that community who have decided to behave like hoodlums. This is either because they were uninformed or they were misinformed about the good intentions of the governnent of Ebony State.

“Don’t forget that these housing projects are not just in Ohaozara Local Government Area, it’s also in Izzi Local Government Area and people are looking for it, including my own local government area of Ivo, to be sited in their domains. But this has graciously come to Umuchima. And so, no person against it, except a few who must have been brainwashed. Having said that, what happened has no connection, wherever, with State Government or governnent officials. If anybody was about to commit a crime and the youths of only went after these disgruntled individuals who were involved in malicious damage and handed them over to the police.”