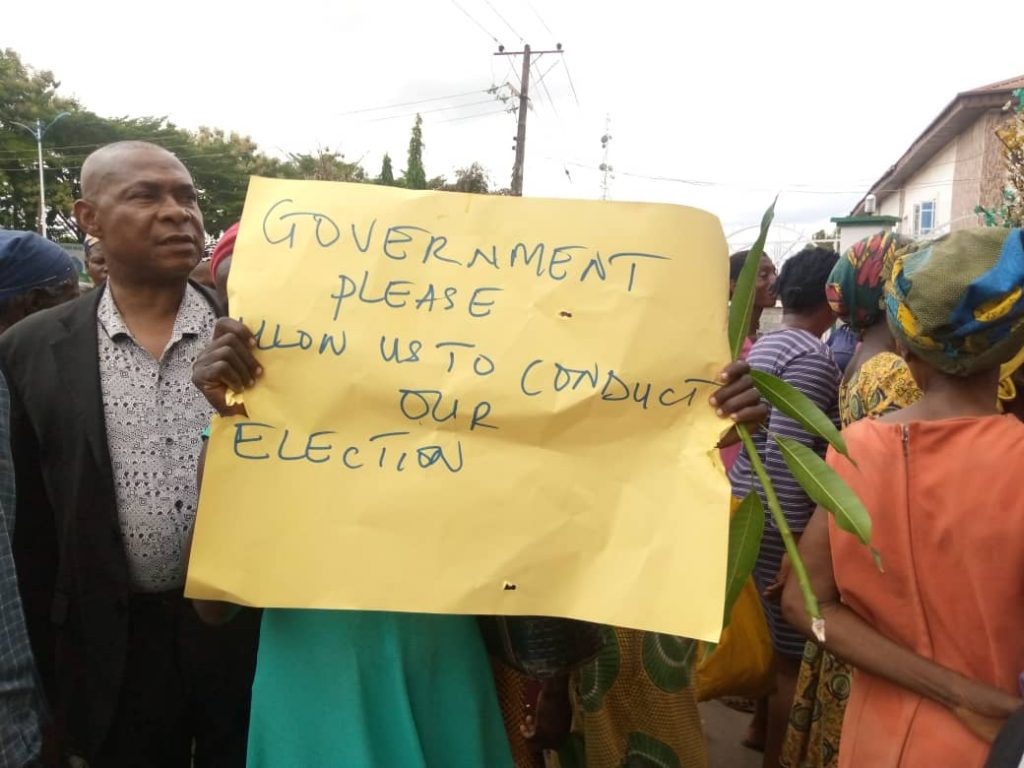 The women trekked from the milling industry to the government house chanting war songs with different inscriptions such as: Ogodo,we don’t need you again, Remove Samuel Ogodo,Govt Allow Us Conduct Our Election, Ogodo must Resign Under Must, Ogodo Rice Mill a betrayer among others.

Presenting their grievances, Mrs Fidelia Mbam, who led the group, hinted that their peaceful demonstration was prompted by the caretaker chairman, Comrade Samuel Ogodo who connived with some persons and since has denied the people their right of conducting the election for the leadership of the industry.

She noted that the caretaker chairman position of comrade Ogodo had elapsed but since have been imposing himself on the traders and day-to-day introducing policies inimical to their business.

She lamented that the caretaker chairman had increased produce tax charged on farmers who bring padded rice to the market, which thus scared farmers who, according to her, have resorted patronizing to village milling companies .

She also regretted that most of their customers “now go to rural areas to buy rice due to high taxation introduced by the chairman.”

The women leader appealed to Ebonyi State government to quickly dissolve the leadership of Comrade Ogodo and allow traders conduct election in the industry.

Reacting, the Governor of the State, Engr. David Umahi, thanked the women for their peaceful conduct.

The governor who was represented by the Secretary to the State government and Coordinating Commissioners, Dr. Kenneth Ugbala, pleaded with the women to go back peacefully as their requests have been noted down by his office pending when the governor of the state will return to address all the matters raised.

The secretary to the state government urged the women not to allow hoodlums hijack their good intentions by destroying government property as Ebonyi State government under Engr David Umahi would continue to ensure there’s peace in all parts of the state.

Meanwhile, when our reporter contacted the caretaker chairman, Comrade Samuel Ogodo on phone,he told us that he was on sick bed and can’t talk