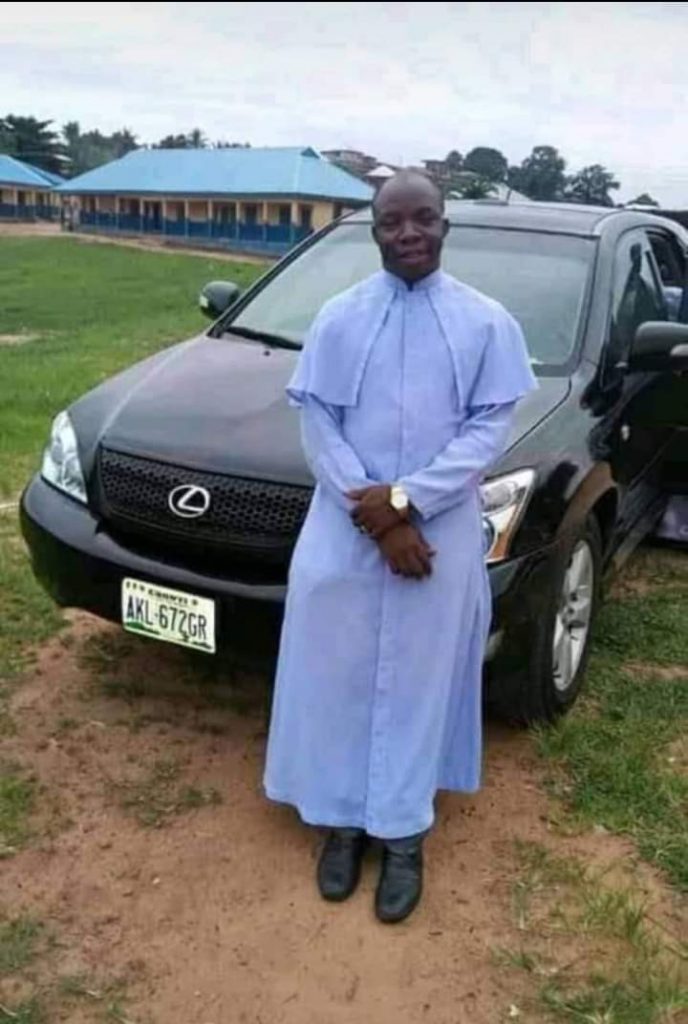 To a greater majority of the knowledgeable Ebonyi populace, the fact that a Catholic priest presiding over Ezzaegu Parish, Reverend Father Timothy Ngwuta has been in the custody of the Nigerian Police Force since December 2021 is no longer news. What is news is the fact that he has now been remanded in the Abakaliki Correctional service centre over allegations bordering on the Effium communal unrests in what is seen as well-calculated politically-motivated moves by embattled Governor David Umahi, using certain State actors.

The Catholic community in Ebonyi has been knocked sideways by facts emerging on the worrisome silence of one of its own, Reverend Father Abraham Nwali who is not only the Chairman of the Christian Association of Nigeria, CAN but also a very powerful Special Adviser to the Governor on Religious Matters. It is now on record that the said Fr. Nwali who is a close ally to the Governor and the government and calls the shots particularly as it concerns religious and communal crises in the State has maintained silence amidst the incarceration of his fellow Catholic priest by a government he serves. This silence, to any reasonable mind is no longer golden!

The only crime Father Ngwuta committed was going to visit his distressed Catholic Parishioners who were displaced and taking shelters in neighbouring communities within the troubled area. He was reported to have been arrested by security operatives on duty in the area and was asked to identify himself. The priest promptly identified himself, only for the police to arrest and detain him in custody- alleging he had a hand in the carnage that has ravaging Effium for over a year. While the Catholic community was yet to come to terms with this strange indictment of a Priest whose only crime was that he chose to embark on a Corporal work of mercy.

According to Pope Francis in an interview with Italian magazine, Credere on Dec. 2, 2015;

“It is obvious that today’s world is in need of mercy and compassion, or rather of the capacity for empathy. We are accustomed to bad news, cruel news and the worst atrocities that offend the name and the life of God.

The world needs to discover that God is the Father, that there is mercy, that cruelty is not the way, that condemnation is not the way, because it is the Church herself who at times takes a hard line, and falls into the temptation to follow a hard line and to underline moral rules only; many people are excluded. The image of the Church as a field hospital after a battle comes to mind here: it is the truth, so many people are injured and destroyed! … I believe that this is the time for mercy. We are all sinners, all of us carry inner burdens…” The world should be informed that Fr. Timothy committed no known crime in law except fulfilling the mandate enunciated above by the Pope.

Ordinarily, the now embattled Father Ngwuta having identified himself as a Catholic priest to his accusers should have been handed to the Catholic Diocese of Abakaliki who has the mandate to investigate any allegation leveled against him and possibly recommend sanctions where and when necessary in line with Catholic doctrines and the rule of the Holy see. But because he is of Ezza descent, the apparently compromised security agents working for and to protect the unknown interests of the State government, he was not only arrested, detained but now remanded in prison custody.

By his actions and conducts, is it not now clear that since the Umahi dispensation, Father Nwali has failed woefully to defend and protect the faith he professes and believes in as a Catholic priest?

While meddling into full-time politics as against his calling as a Priest, Fr. Nwali was alleged to have been unilaterally imposed on the Christian community as the Chairman of CAN in Ebonyi State by the ‘tongue-talking’ but evil-doing government of Umahi just to serve and protect its selfish interests. If Umahi imposes leaders on various town unions and bans activities of those who oppose or resists him from doing same in their communities, it was therefore not surprising that he fought hard to successfully ‘impose’ politically-vested Father Nwali as the leader of the body of Christ in Ebonyi in 2017 despite protests and the heated controversies it generated.

Fr. Nwali’s numerous atrocities was also felt in his ignoble role in the Ezza-Ezzilo crises wherein he spearheaded the demarcation of the controverted boundary between the two warring communities during which he unilaterally gave a meagre less than 250 hectares of land right inside the Ezzilo-dominated enclave as against Exco and Ebonyi stakeholder’s decision to divide the entire Ezzilo land into two equal parts, notwithstanding the fact that Ezzas had more lands in the area before the war broke out in 2010. Till date, the same Father Nwali has blatantly failed to release the outcome of the government peace committee on Amana Ezza and Ohankwu Ikwo boundary dispute that claimed many lives and led to destruction of several properties belonging to Amana people.

Since the outbreak of the Effium crises, Father Nwali who is seen as the ‘eye, nose and mouth’ of the Umahi government has consistently blamed the carnage on Ezza-Effium natives who had before the politically-motivated war dwelt in absolute peace with the Uffiomites whose fore-fathers were saved from extinction by Ezza warriors and have had an age long covenant never to spill each other’s blood. It is now clear by his actions and conducts that Father Nwali is being used by the Umahi government to not only deal ruthlessly with our Ezza people but also fight his fellow Catholic priest and faith.

The recent memo wherein the Ebonyi State government called for the release of some 31 ‘under-aged’ fighters from Effium who were arrested with arms while attacking an Ezza-dominated village and have remained remanded in the Abakaliki Correctional facility speaks high volumes about the deliberate partiality of the Umahi-led government in trying to end the killings in Effium. It is an outright invitation to anarchy and lawlessness that a government elected to protect lives would claim that the 31 remanded ‘under-aged’ attackers of Uffiom origin were ‘deceived’ into carrying arms and therefore should be admitted to bail. The question is: Who armed and deceived the acclaimed under-aged children into carrying arms to attack an Ezza village?

That an entire State Executive Council could be this partial and imbecilic in its reasoning on a sensitive matter like an insecurity that has claimed and still claiming many lives and property shows the extent the Umahi government could go to manifest its hatred for the Ezza nation. It further buttresses the fact that Ebonyi has become a downright banana republic where men in power have all lost their reasonings and consciences.

For the Catholic community the World over, their attention needs to be speedily brought to the fact that a Priest who only embarked on a Corporal work of mercy has remained incarcerated in prison without any fair hearing or even trial by a government that detests truth, fairness and justice. It is therefore wisdom to beckon on the Catholic Diocese of Abakaliki, the Catholic Bishops of Nigerian and the Holy See to immediately order for the unconditional release of Father Ngwuta, reprimand the government and all those behind his ordeals and call for diligent investigation into the allegations leveled against Dis- (Honourable) Father Nwali and the Umahi administration in Ebonyi State.