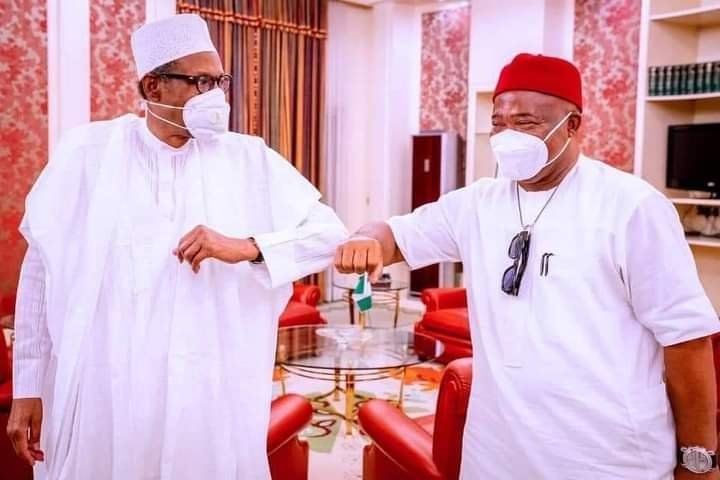 The President, Major General Muhammadu Buhari (retd.), has asked the National Assembly to remove the clause that has to do with direct primaries from the Electoral Act Amendment Bill.

The PUNCH gathered on Monday that the President, who stated this in his letter to the Senate, asked the National Assembly to remove the controversial clause on direct primaries from the bill and return the proposed law to him for assent.

The Special Adviser to the President on Media and Publicity, Garba Shehu, confirmed to one of our correspondents that Buhari had sent the letter to the National Assembly.

But a source who was privy to the content of the letter said the President refused assent because political parties had their various constitutions that stipulated mode of primaries that should be adopted.

Primary mode against party constitutions, too expensive, small parties will be marginalised
According to the source, the President argued that it would be unconstitutional to force parties to adopt direct primaries.

He also said small parties will be marginalised.

“With these reasons, the President has returned the bill to the National Assembly, asking the lawmakers to look at the clause that has to do with direct primaries by political parties, work on it and return the document for assent because it will compound insecurity in the country,” the source added.

The bill was transmitted to the President on November 19, 2021, after both chambers of the National Assembly passed shortly before a tripartite meeting with the APC leadership and the governors.

Shehu said, “It (letter to the Senate) is a privileged communication so it is for them (National Assembly) to disclose the contents.”

Top sources who spoke to The PUNCH said the President had declined assent because of the controversial direct primary which virtually all political parties had rejected.

The bill was transmitted to the President on November 19, 2021, after both chambers of the National Assembly hurriedly passed it against the wishes of the leadership of the APC.

Apart from mandatory direct primaries, the bill also makes a provision for electronic transmission of results by INEC and increases the limit for election spending by candidates.

However, the APC Governors Forum led by Atiku Bagudu of Kebbi State had rejected the bill because of the direct primary issue.

Amid the raging controversy, the President wrote a letter to the Independent National Electoral Commission seeking the view of INEC over the matter.

He also wrote to the Attorney-General of the Federation, Abubakar Malami (SAN), who took sides with the APC governors.

Malami pointedly told the President that forcing all political parties to adopt direct primaries would be a recipe for disaster and confusion.

However, several Civil Rights Organisations put pressure on the President to sign the bill mainly because it empowers INEC to transmit election results electronically and direct primaries would ensure that governors would not be able to impose their candidates on others.

READ MORE:  My Victory is for Ukwa West... Chief Okey declares *As he dedicated my certificate to God

Meanwhile, Rivers State Governor, Nyesom Wike, has said the National Assembly lacks the temerity to veto the President, over his refusal to sign the Electoral Act Amendment Bill.

The governor said the federal legislature lacked the courage to veto the President, because it was part of the All Progressives Congress scheme to deny Nigerians free, fair and transparent elections in 2023.

He said the only way for Nigerians not to repeat the 2015 and 2019 mistakes of voting the APC Federal Government into power again was to send the party and its representatives packing in 2023.

Wike made the assertions at the turning of the sod of the Chokocho-Igbodo Road, which was performed by Governor Seyi Makinde of Oyo State, on Monday, in the Etche Local Government Area of Rivers State.

The governor’s media aide, Kelvin Ebiri, quoted Wike as saying this in a statement he made available to journalists.

The governor recalled how most people did not believe him when he raised concerns that Buhari would not sign the Electoral Act Amendment Bill into law to give legal impetus to electronic transmission of election results.

Read Also
Dec 19 deadline: Buhari hasn’t signed direct primary into law
AGF writes Buhari, says mandatory direct primaries will cause confusion
Parties will bear cost of direct primaries, Yakubu tells Reps
Wike stated that having known the modus operandi, style and strategy of the APC, it was obvious to him and all discerning minds that the clause on direct primaries was inserted into the bill as a ploy for the President to refuse assent to it.

According to him, the APC members are afraid that if results are transmitted electronically, they will not survive the 2023 general elections.

The governor stated, “What the APC resolved in the meeting they had was that their problem is not necessarily direct primaries, but the electronic transmission of results in 2023.

“If they allow that, obviously the APC will lose the election in 2023 and they told themselves that the only way they can survive that is to include the direct primaries in the bill so that Mr President can use that as an excuse that he will not sign the bill.”

He accused governors of the APC and their National Assembly members of deceiving Nigerians that they were engaged in a battle of supremacy over the issue of direct primaries, whereas they had secretly agreed to scuttle the possibility of transmitting election results electronically in 2023.

Wike said the National Assembly did not have what it takes to veto the President’s refusal to assent to the bill.

READ MORE:  Umuahia North 2023: I've not come to use, dump you... Rev. Amalambu assures ... He's a favour from God to turn things around in Abia...Evang. Ukaiwe

According to him, the lawmakers are not interested in protecting the interest of Nigerians and ensuring that elections are free and fair with the electronic transmission of results.

The governor maintained that because the APC did not take the interest of Nigerians as a priority, its leaders were immersed in crisis while jostling for benefits that fan their personal egos.

N’Assembly won’t override Buhari on bill, says Kwankwaso
A former governor of Kano State, Senator Rabiu Kwankwaso, says the President will not sign the Electoral Act Amendment Bill because governors have pressured him not to approve the provision for direct primaries.

Kwankwaso said this during a chat with The PUNCH ahead of the National Assembly’s recess.

He, however, said because such mandatory primaries could make governors less powerful, they would not support it.

The ex-lawmaker said, “In 1999, I was elected as the candidate of the PDP through direct primary but along the line, we realised that there were issues with the direct primary. It is very cumbersome; it has some weaknesses here and there, but after practising the indirect primary, I can easily compare and say the direct one is more democratic and better than the indirect.

“But one thing that I believe is that the governors and other powerful people will never want to approve the direct primary because the power will get out of the government houses and land in the hands of the voters and members of the parties. So, they will never want it. For me, I find it extremely difficult to see how the President will sign it.”

When contacted on Monday to confirm if Buhari had communicated his decision to the National Assembly, the Chairman of the Senate Committee on Media and Public Affairs, Senator Ajibola Basiru, said, “I am not aware.”

His counterpart in the House, Benjamin Kalu, however, said the chamber would take a decision on it today (Tuesday).

One of the principal officers of the House, who also confirmed the communication to one of our correspondents Monday night, disclosed that the leadership of the National Assembly held an emergency meeting after it was received.

The lawmaker, who spoke on the condition of anonymity, spoke to our correspondent at about 10:30pm.

“We are currently at holding a leadership meeting over the communication. I won’t be able to say much on the development right now,” he said.