#EndSARS: Changing SARS TO SWAT is like changing Econet to Airtel – Archbishop Opoko. “What Nigeria needs is…….

by FAMOUS REPORTERS October 19, 2020 0 comment 14 views
Kindly Share This Story
The Methodist Archbishop of Umuahia, Abia State and the Chairperson of the World Methodist Council, Social and International Affairs – Most Rev.
Dr. Chibuzo Raphael Opoko says disbanding “SARS” and giving it a new name, “SWAT” does not provide solution to the protracted challenges of the brutality against Nigerians.

Archbishop Opoko stated this while responding to questions in his office at Umuahia to Famous Reporters on the current issue of #EndSARS and #NoSWAT stated that disbanding *”SARS”* and giving it a new name *”SWAT”* is not the solution to the endemic problems and challenges the *#EndSARS PROTEST* represents. 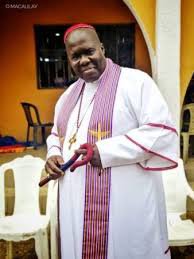 The issue of police brutality, abuse, extortion, dehumanisation, maiming and killings with impunity is a by-product of a corrupt and depraved system and structure where the rule of the law has been kept in abeyance.

In a civilised society, continued the Archbishop, “there are norms and regulations that guide conduct and when those norms are violated, you face the consequences in an appropriate punishment in law.#EndSARS the Cleric pontifies, “represents agitation against gross and grave corruption that has destroyed the fabric of the society.

It is a protest not only against police brutality and killings but against economic inequalities, imbalances in political appointment, misgovernance, widening gulf between the rich and the poor, lack of infrastructures such as roads, hospitals, light, housing and water.”Further, the outspoken cleric said, it is a protest and a call for the birth of a new Nigeria where the rule of the law reigns dispensing justice equally.To call for #EndSARS alone cannot bring solution to the myriad of Nigeria’s problems and challenges.

Infact, the flaring Cleric continued,” There will be more crime and criminal activities as the few who gave “SARS” a bad image could seemingly facilitate and orchestrate a vicious criminal activities that may suggest that it is a direct consequence of disbanding the Unit.Again, an attempt to change the nomenclature to “SWAT” must be such an insensitive approach and a seeming insult to the intelligence of millions of well meaning Nigerian people, the Archbishop declared.

“Will changing the nomenclature or name also change the conduct, the attitudes, the character, the perception and the manner and ways the officers carry out their duties, the Archbishop queried?” Besides, a change to “SWAT” would be seen as meaning, “SARS With Alternative Title” Period.

“It’s just like changing Celtel to Econet, from Econet to Zain, Zain to Airtel and Airtel still does the same service provision with the attendant network challenges that affect also other network providers. So, it dose not change anything.The Nigeria Police need a total overhaul, a kind of reformation and restructure from the entry point to the retiring point. There have been reports of some officers who have displayed impunity. Such officers need to be brought to book. Those who tortured, abused, decimated, brutalized and killed unarmed citizen must face the law.

“Those judges who were reported to have compromised their oath of office should be investigated and if found culpable, they should face sanction according to the law. The victims of Police brutality should be compensated. Stated the Archbishop.We need to remind ourselves that the rank and file of the Nigeria Police are human beings – They are father, mothers, brothers, sisters, sons and daughters. They experience the hardship like every other Nigerian as they are exposed to the same market.

“They are not all bad. There are decent and polished Police Officers still in the force. No doubt, there are those who give bad image to the Nigerian Police Force.It is pertinent to observe that the Nigeria Police Force has maintained an exceptional image of outstanding character, conduct, patriotism, commitment, dedication and devotion to duty when on an international assignment. Why is it that we cannot have such in our country?

“Who is to blame? questioned the Archbishop.The government and leaders are to blame. There are rumours over years going round that Police Officers who are on the road are given target – Funds they must account to their bosses? Is this true? The government must investigate such and ensure that it can not be heard in the Nigeria Police Force again, stated the Cleric.The welfare package and remuneration of the Nigerian Police must be reviewed upwards.

“The live of the Nigerian Police Officer must be covered insurance wise. There should be some form of special consideration of their children education wise. If we want the best from majority of the force members, we must encourage them as a government, opined the Archbishop.Let me state categorically, that a EndSARS is beyond the call for total overhaul of the Nigerian Police Force. It goes to question the fabric of the society – It calls for an overhaul of the security architecture, equal representative in government officers such as appointments to the State and Federal levels, creation of opportunities for the youth to participate in governance and a reduction in the number of unemployment youths among many others – The Archbishop opined.The Archbishop, prayed the Almighty God to cause our leaders to listen to the yearnings of the youth Nay! Masses.
READ MORE:  Not Interested In The Throne Anymore, I've Moved On Already --- Sanusi
#EndSATEndSARsProtestMost Rev. Dr. Chibuzo Raphael Opokopolice brutality
Share
0
FacebookTwitterPinterestEmail

Amidst Attacks OnEndSARS Protesters,  What Buhari Said about Youths’ anger

Orji  Kalu visits Ndoma-egba, sympathizes with him over...

“Amotekun has come to stay and we must...