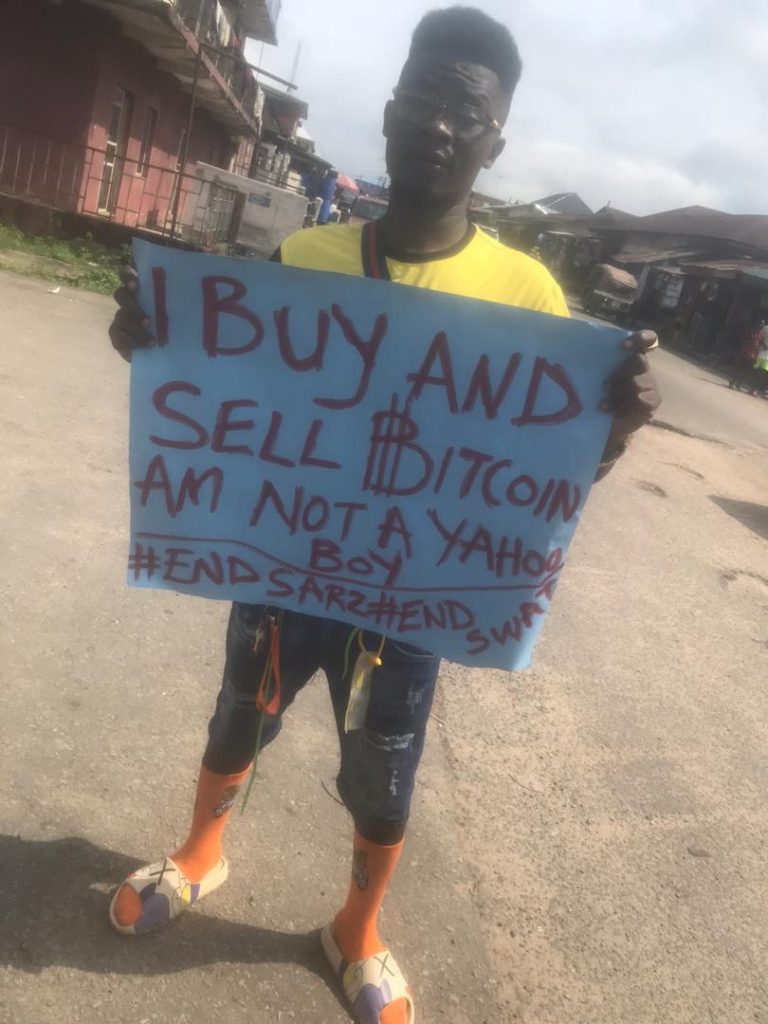 Ex-Police officer’s son, Uchegbulam Onyinyechi Faith has narrated his ordeal in the horrible hands of SARS shortly after his arrival from Ghana where he had engaged in a dirty kind of job in a bid to acquire a skill.

According to him, the Police officers had arrested him in March, 2020 and wrongfully accused him of involvement in Cyberspace fraudulence.

My name is Uchegbulam Onyinyechi Faith, from Amasiri in Ebonyi state local government area of the South East region. And I grew up in Umuahia, Abia state. I’m an orphan.

I studied Electronics and Electrical Engineering at Michael Okpara University of Agriculture, Umudike. I graduated in the year 2018. I went for service and we were the people who have just passed out three days ago from NYSC.

I spent one and eight months in Ghana. This is Ghana’s flag. I learnt how to computer maintenance and repair there in Ghana.

So, upon my return, I bought Lexus ES300 and an iPhone. So, on one of the days I spent here in Umuahia, my friends invited me to Concordia hotel at Mission Hill.

On my way, SARS blocked me with their Hilux car and ordered me to come down from my car. Immediately, the first thing the man sighted was my iPhone and he said: “you have an iPhone and you’re going to pay us #250,000”. And then I asked him: “Oga, is it a crime to use an iPhone? Please, look at my father’s picture, he’s a policeman”, I said. But, surprisingly, the officer told me that in spite of my claims, that they were doing their job.

READ MORE:  What My Boyfriend's ghost killed during #Endsars told me, Nigerian girl tells her encounter with ghost

They immediately carried me to a popular hotel in New road and not even the police station. The hotel is located at Ubakala, Umuahia South and they insisted that I must pay #250,000 for owning an iPhone and a car. I told them I was a graduate without a government work but I’m sustaining myself with the skill I acquired.

We began to bargain and I offered them “#30,000 which they declined and insisted on#150,000 but I told them I hadn’t got such amount of money and they seized me there for 2hours. This incident took place in March this year when I returned from Ghana and could not go back because of coonavirus lockdown.

Asked why he agreed to make the unwarranted payment instead of reporting the matter to the Police, he said:

They’re the Police themselves and they threatened me with all manners of things. They took me to my house and got every of my details so that I would not do anything stupid. These Nigeria Police officers are bloody; they can do anything and kill anti at will.

Most times, they’ll carry someone, pretending that they have arrested the fellow but in the end, they’ll kill you and I didn’t want to be wasted just like a fowl and I had no other choice than to giver them #100,000 because they really wew desperate and could do whatever once their eyes turned red. So, I didn’t want them to kill me just the same way they killed my man, Kolade Johnson because of an iPhone so I had to give them the money and have my life.

I’ve never been involved in any criminal offense both here in Nigeria and over there in Ghana. I’ve never collected anything that doesn’t belong to me before. I’ve always maintained a good name because my father, though a police officer he was a pastor.”

The young Nigerian man implored the federal government to put to extinction SARS and SWAT, saying that some blood thirsty Police officers have used it to rip life off innumerable innocent youths in the country.

“I want the federal government to end SARA and there’s nothing like SWAT. That SWAT is still the same SARS but they’re trying to change the name. Those men are criminals in uniform. If you see the way they harassed me as if I had been a criminal. I was arrested and harassed same way a wanted kidnapper would be treated.

“Shockingly, after giving them the #100,000, their leader came back to me and said: “Let me give you the tips. Anybody we see wearing socks or carrying bottle water, the person is believed to a Yahoo boy”, he said.

“Then I told him that they should stop mistaking anyone who has an iPhone as a Yahoo boy. He began smiling and hugged but to my amazement, he hugged me and said sorry for everything. Then, he advised me to start buying pure water whenever I’m thirsty and avoid bottle water.  He said that carrying bottled water in my hand was a crime. And I asked him when in the world carrying or drinking bottled water had become a crime. I interacted with him and I have evidence of the payment I made to them. I took a selfie with him also and I still have it here.