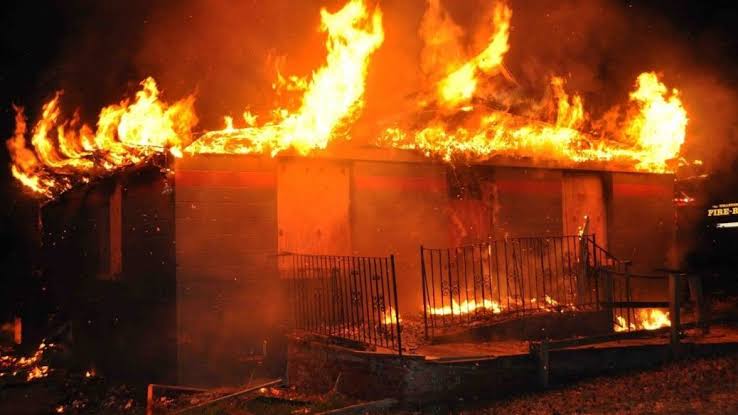 Abakaliki-Hoodlums that hijacked the EndSARS protests in Abakaliki, yesterday reportedly shot two Policemen, injuring them in the process.

The victims who are presently nursing their injuries were shot at Central Police Station, Abakaliki as the Hoodlums set ablaze two Police Divisions in the State.

The inferno that occurred at the two Police Stations destroyed four Exhibits vehicles even as the hoodlums broke into the cell and released eight suspects, and also destroyed other Police properties seen within the Police stations.

According to the statement by the State Police Spokesperson, DSP Loveth Odah, hoodlums looted and carted away about thirty exhibit motorcycles/Plasma TVs/Fans and other valuables.

“The criminally-minded hoodlums who were matching with Endsars/End Nigeria/End the Zoo Country placards, suddenly entered and open fire on Policemen at “A” Division (CPS) Abakaliki and two Policemen sustained bullet injuries, the hoodlums where immediately repelled.

“They retreated and preceded to “B” Division Kpirikpiri/”C” Division Ekumenyi set some parts of the divisions ablaze together with four Exhibits vehicles, broke into the cell and released eight suspects, and also destroyed other Police properties and exhibit vehicles seen within the Police stations.

“The hoodlums looted and carted away with about thirty exhibit motorcycles/Plasma TVs/Fans and other valuables.

“Similarly, the same criminals attempted to attack and release inmate from Abakaliki Federal Prisons, but the join forces of the Police and other sister security agencies could not allow them access to the facility.

The Commissioner of Police, Ebonyi State Command, CP Philip Sule Maku has condemned the attack and urged officers and men of the Command to remain calm while they continue to manage the situation professionally in the State.

He further appealed to community leaders, parents and guardians, traditional rulers and religious leaders, to caution the youths against violence and any act that is capable of aggravating tension in the State as such will be counter-productive.