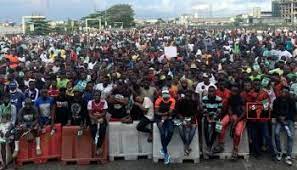 Worried by the obvious negligence of the President Mohammadu Buhari’s led government of the All Progressives Congress, APC, towards the brutal massacring of unarmed #Endsars protester at Lekki tollgate, on October, 20, 2020, a group known as ‘Action Group On Free Civic Space’ has called for the immediate arrest and speedy prosecution of the trigger happy Security Operatives.

This is even as the 2020 #Endsars protesters observe their one year anniversary today, October 20.

In an address, made available to Famousreporters.com, the group condemned in totality the brutal attacks launched on thousands of unarmed young protestors demonstrating against police brutality during the October 2020 #ENDSARS protests, by security agents on the dreadful night of October 20, 2020.

“We hereby demand the immediate arrest and speedy prosecution of every person responsible for perpetrating the horrid crime of police brutality in
Nigeria and most importantly, the murderous attacks of October 20, 2020, now referred to as the
Lekki Tollgate Massacre.”

The address read in detail:

ENDSARS PROTESTS 2020: ONE YEAR AFTER

October 20, 2021
Distinguished Ladies and Gentlemen,
The Action Group on Free Civic Space (AGFCS) once again condemns in very strong terms the
brutal attacks launched on thousands of unarmed young protestors demonstrating against police brutality during the October 2020 #ENDSARS protests, particularly at the Lekki Tollgate Plaza in
Lagos on the dreadful night of October 20, 2020. Indeed, forensic experts engaged at the Lagos State
Judicial Panel of Inquiry on Police Brutality have confirmed that live military-grade bullets were
fired at protestors and the cartridge casing obtained from the Lekki Tollgate are of the same calibre
as the Nigerian Army’s live ammunition. What is most worrying is that one year later, despite
overwhelming evidence gathered from earlier on-ground investigations, video footage, eyewitness testimonies, hospital reports, and most recently forensic reports that Nigerian security forces opened fire on protestors, no one has been held accountable. We hereby demand the immediate arrest and speedy prosecution of every person responsible for perpetrating the horrid crime of police brutality in
Nigeria and most importantly, the murderous attacks of October 20, 2020, now referred to as the
Lekki Tollgate Massacre.
A year ago today, we witnessed the eruption of one of the most powerful mass movements in the
history of our nation – despite the turbulent start of last year which was marked by the coronavirus
pandemic, our country, confronted head-on, another pandemic within the coronavirus pandemic – the
pervasive menace of police brutality mostly perpetrated by the disbanded Special Anti-Robbery Squad
(SARS) unit of the Nigeria Police Force. First mobilised through social media, the #EndSARS protests
shook major cities in the country for days in October until the demonstrations were murderously
aborted when unknown soldiers opened live fire on peaceful protestors at the Lekki Toll Gate, Lagos
State – a day we will never forget!
The National Executive Council (NEC) had in the wake of the violent dispersal of peaceful protestors
in 2020 directed states to constitute judicial panels of Inquiry to investigate complaints against SARS
and other police units. However, the spate of events that have assaulted public consciousness since the
demise of the protests in 2020 challenges the sincerity of Nigerian government’s promises to address
the legitimate demands of Nigerian youths as per, initiate far-reaching reforms addressing police
brutality and other ingrained structural problems in the security sector, and engage in constructive
dialogue with citizens to find lasting solutions to other social injustices prevalent in the country.
For instance, security operatives have continued to criminalise and brutalise protestors, engage in
extra-judicial killings and offensive shoot-on-sight rhetoric despite the passionate marches against
police brutality last year. In similar context is the matter of the Judicial Panel of inquiries constituted
in the aftermath of the #ENDSARS protests, despite the conclusion of panel proceedings across 28
states in the country bar Lagos State and submission of recommendations to the Federal Executive
Council and state governments, nothing tangible been done to implement the recommendations of the panel reports – consequently, compensations due to many victims of police brutality have remained
unpaid with guilty officers like James Nwafor and Ugochukwu Ozuode amongst other security
operatives indicted for their legacies of cruelty at the various panels, still roaming free, unaccountable
for their many crimes against humanity.
If there was anything beyond the nauseating horror of police violence that the flood of protests
exposed last year, it is indeed the frightening reality that constitutionally protected rights and civil liberties once enjoyed by Nigerians have deteriorated to the lowest points. As of today, the digital
database – www.closingspaces.org – records an alarming number of 435 incidents of crackdowns on
civic actors and Nigeria’s civic space with vicious attacks directed at freedom of expression,
association, and assembly, and most significantly in recent times, media and digital rights.
Furthermore, preliminary findings from The Security Playbook, a soon-to-be-released report of the
AGFCS, reveal that we have now progressed into a dangerous era of digital unfreedom unmatched by
any period in the history of our democratic journey as a country. This much we have seen with
consistent censorship of internet and media freedoms in the country, the unconstitutional ban of Twitter and many draconian policies aimed at gagging the press. Perhaps, a more troubling
knowledge is the fact that Nigeria has now become a surveillance state judging from its misuse of
digital laws, technologies, and importation of sophisticated hacking tools to arbitrarily intercept
communications of targeted civic actors, illegally monitor opposition voices in government, silence
dissent and, generally restrict people’s right of free expression and access to information, especially
on cyberspaces.
At this juncture, the AGFCS will like to remind the Nigerian government that democratic freedoms
are not gifts bestowed to people by illiberal state actors but fundamental rights guaranteed to every citizen under the Constitution of the Federal Republic of Nigeria 1999, as amended. Accordingly, the Nigerian government must recommit to its sacred trust of duty by upholding the rights, dignity,
freedoms and well-being of every Nigerian above all parochial interests. Finally, the AGFCS continues
to stand in firm solidarity with victims and survivors of police brutality and other heinous crimes
against humanity in Nigeria and once again urge the Nigerian government to seize the moment of
this significant day to:
• Divorce itself from the undemocratic and despotic inclination to target and oppress
individuals, activists, dissenting voices and civil society when they speak up, advocate for
accountability from government or organise for lawful demonstrations.
• Fulfil its promises to citizens by bringing to book all erring security officers indicted at the
various Judicial Commissions of Inquiry
• Restore hope in victims of police brutality by fully implementing the recommendations for
compensation submitted by all Panels of Inquiry set up in the country
• Engage in dialogue with all aggrieved parties and all stakeholders to chart a new path to
resolve the insecurity challenges and ethnic discontent that ails the country
• Release all #ENDSARS protestors still unlawfully imprisoned for daring to challenge an
oppressive status quo
• Unconditionally lift the suspension of Twitter in Nigeria and commit to opening up space for
citizens to participate in governance and engage in constructive dialogue
SIGNATORIES