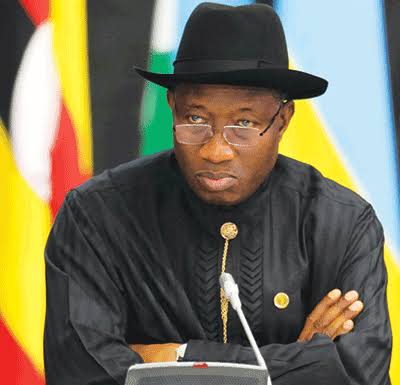 Share
Facebook Twitter LinkedIn Pinterest Email
Kindly Share This Story
Former President of Nigeria, Dr. Goodluck Jonathan Ebele has decried the use of violence on the #EndSars protesters by the federal government, saying that the use of deadly force against citizens “only aggravates tense situations rather than assuage it.”

Nigeria’s immediate past president who condemned in totality the use of unreasonable force on #EndSARS protesters in Lagos state by the federal government, and urged the Buhari administration to understand that “a nation can never win a battle against its own people.”

This is even as the subsistent nationwide protests against the now-disbanded police special anti-robbery squad (SARS) grew into agitation for improved governance in addition to justice for victims of police brutality.

It would be recalled that soldiers, had on Tuesday, fired live rounds on armless youths at the Lekki tollgate, as twelve people regrettably lost their lives in the shooting and in a related development in Ikeja, according to Amnesty International.

The former president said in a statement that the event of recent days “has been a difficult time to me as well”.

He said the task of building a nation must involve both the old and the young, adding that Nigeria “cannot afford to lose the lives of our youth who we look up to take over leadership and continue our nation’s journey to greatness”.

“As leaders, we must understand that a nation can never win a battle against its own people,” he said.

“Thus, the use of deadly force against citizens only aggravates tense situations rather than assuage it. We must therefore move away from battlegrounds to middle grounds in our individual and national life. This, I believe, epitomises the essence of democracy.

“I condemn any unnecessary loss of life and urge efforts to be stepped up to ensure that there is no such reoccurrence.

“We all must accept that we are all brothers and sisters of one Nigeria, and always act towards each other accordingly.”

Jonathan, who added that “nobody’s interest is worth the blood of any Nigerian citizen,” asked security agencies to ensure maximum restraint is applied in carrying out their constitutional responsibilities of protecting lives and property.

He also asked young Nigerians to “give peace a chance especially now that different stakeholders have demonstrated the willingness to investigate the various allegations of excessive use of force on citizens and address the culture of impunity by security personnel”.

‘My quick action on SARS misconstrued as weakness’
This is as President Muhammadu Buhari in a nationwide address on Thursday, condemned people he called subversive elements who are bent on using #EndSARS protesters to cause chaos and truncate the country’s democracy.

Buhari also suspended the #EndSARS protests nationwide, saying his administration would not tolerate undermining of the country’s unity by anybody.

The President who kept mum about the Lekki killings, regretted that the promptness in which his administration responded to the demand of the protesters to disband SARS was misconstrued as a sign of weakness.

He claimed that some people twisted the gesture for their selfish interests, therefore leading to violence.

According to the President, “The choice to demonstrate peacefully is a fundamental right of citizens as enshrined in Section 40 of our Constitution and other enactments; but this right to protest also imposes on the demonstrators the responsibility to respect the rights of other citizens, and the necessity to operate within the law.

“As a democratic government, we listened to, and carefully evaluated the five demands of the protesters. And, having accepted them, we immediately scrapped SARS, and put measures in place to address the other demands of our youth.

“On approving the termination of SARS, I already made it clear that it was in line with our commitment to the implementation of extensive police reforms.

“Sadly, the promptness with which we have acted seemed to have been misconstrued as a sign of weakness and twisted by some for their selfish unpatriotic interests.

“The result of this is clear to all observers: human lives have been lost; acts of sexual violence have been reported; two major correctional facilities were attacked and convicts freed; public and private properties completely destroyed or vandalised; the sanctity of the palace of a peacemaker, the Oba of Lagos has been violated. So-called protesters have invaded an international airport and, in the process, disrupted the travel plans of fellow Nigerians and our visitors.

“All these executed in the name of the #EnSARS protests. I am indeed deeply pained that innocent lives have been lost. These tragedies are uncalled for and unnecessary. Certainly, there is no way whatsoever to connect these bad acts to legitimate expression of grievance of the youth of our country.”

Buhari also said some people were spreading falsehood, particularly through the social media that his regime was oblivious to the pains and plight of its citizens.

Meanwhile, President Buhari is currently in a virtual meeting with former Nigerian leaders.

The meeting started at 9:00 am with President Buhari presiding from the Council Chambers of the Presidential Villa, Abuja.

Those physically present at the Council Chambers with the President include Vice President Yemi Osinbajo; Secretary to Government of the Federation, Boss Mustapha; Chief of Staff to the President, Professor Ibrahim Gambari and National Security Adviser, Major General Babagana Monguno.

The meeting is currently going on behind closed doors but the agenda might be related to the mood of the nation and how to find a solution to the present security challenges.