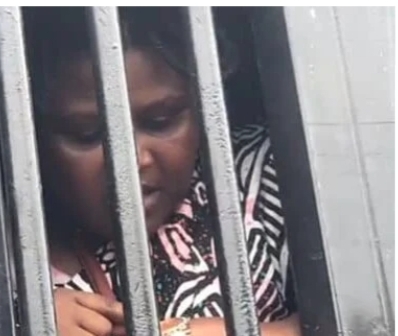 A passer-by, Blessing Iko, has narrated her ordeal in the hands of the operatives of the Lagos state police command, at the #EndsarsMemorial venue.

Blessing Iko lamented that the Police arrested her and at the same time, confiscated her phone for holding the Nigerian flag.

Speaking to journalists while in a police van, Iko said the officers seized her two phones and held her in their van.

According to her, the flag was given to her by the bus conductor who asked all passengers to disembark as he approached the Lekki tollgate where the #EndSARSMemorial protest was taking place.

“I boarded a bus going to Iyana Oworo from Ajah then we got to a point and the driver said they could not go further, asked us to come down and refunded money to some of us,” she said.

“He gave me the Nigerian flag to hold, he said once I am with the flag I would be allowed to pass.

“As I was walking, I saw these policemen and they asked me to come inside the vehicle. They said I was protesting and collected my two phones.

“They said the time they gave the protesters had finished that they were supposed to end by 10 am.”

It would be recalled that last year’s protest which ended in catastrophe, was borne out of the to call to disband the now dissolved police unit known as the special anti-robbery squad (SARS).