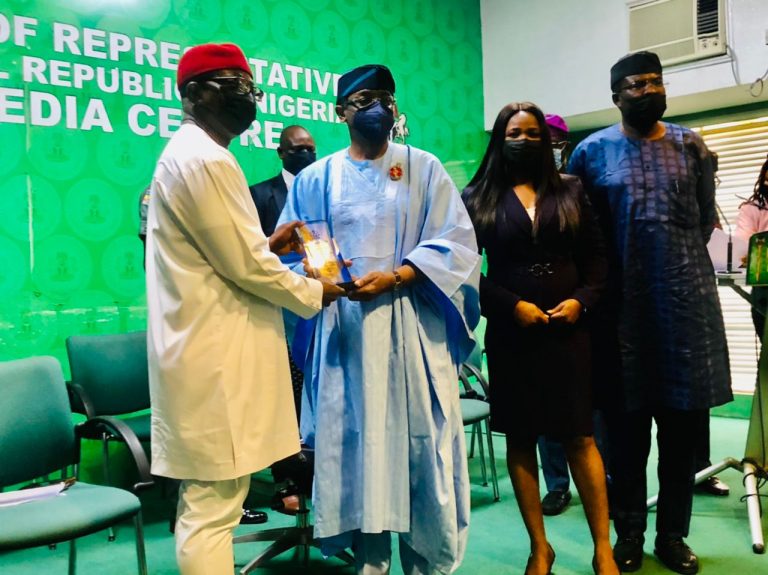 The National Assembly Press Corps has conferred an award of Excellence in Legislation on the member representing Ikwuano Umuahia North and South, Rep. Sam Onuigbo.

The award ceremony which took place today, Wednesday, at National Assembly Press Centre, National Assembly Complex, Abuja, was in recognition of the landmark achievements of Rep. Onuigbo since assumption of office.

In his remarks, the Vice President of (Africa) Globe International and President Globe Nigeria, expressed gratitude to the crew, describing the honour as “an eloquent testimony to the fact that I have done something laudable”.

Continuing, he said: “Dean of Bills/Most Dedicated Lawmaker of the Year. This has a certain ring to it, especially the title of “Dean of Bills”. I think that the Climate Change Act is so important that if those who constantly place their fingers on the pulse of our nation’s lawmaking think the sponsor of the Bill that gave birth to the Act deserves that title, then it must be apt. Thank you. I am humbled.

The Chairman of Climate Parliament, Nigeria explained that the journey to Nigeria getting a Climate Change Act as a long and tortuous one.

However, he attributed the huge success as recorded to Mr. President assenting to the Bill passed by the incredible 9th Assembly, glosses over the pains.

Adding, he said: “For this, we must be thankful to His Excellency, President Muhammadu Buhari GCFR, for exhibiting precocious leadership and matching his promise of May 29, 2015, with action.

“I am happy that today, we have a Climate Change Act which will guide Nigeria in her decarbonization efforts, ensure that we justly transit to net zero, bring requisite attention to the menace of climate change, provide funding for adaptation and mitigation measures including nature-based solutions, create employment for our teaming youth, help us on our journey towards green recovery, and ultimately ensure that we sustainably develop while preserving this earth for our children. The success recorded was possible because we collectively fought for this. It was not a one-man show.

“The exceptional leadership and commitment shown by the leadership of the National Assembly especially the Speaker of the House of Representatives, His Excellency, Rt. Hon. Femi Gbajabiamila, who not only constituted (and also caused the Ministries of Justice and Environment to send in their own representatives) a review committee to identify and address the areas of contention that made President Buhari and former Presidents deny assent to the Bill in the 8th, 7thand 6th Assemblies, but also followed up to ensure that expedited passage was effected at the House and the Senate. In Mr. Speaker’s absence, the Deputy Speaker took over and also pushed for the Bill to be given the urgent attention it deserves. Make no mistakes about it, climate change is an existential issue and must be treated as such. Our country Nigeria, must therefore, take appropriate and coordinated actions in its transition to net-zero so as to avoid being left behind with a lot of stranded assets.

“I would like to end by specifically sending my commendation to the irrepressible Minister of State for Environment, Chief Sharon Ikeazor for her love for Nigeria and the future of the country. Nigeria needs more leaders like you. In the same vein, I commend the Attorney General of the Federation and Minister of Justice, Hon. Abubakar Malami SAN, for appreciating the importance of this legislation and therefore providing the necessary support.

“Assent to the Bill is an important starting point, but the journey ahead is still a long one. I am certain that we will achieve success if we all work together, especially by ensuring that the implementation phase is commenced as soon as possible.