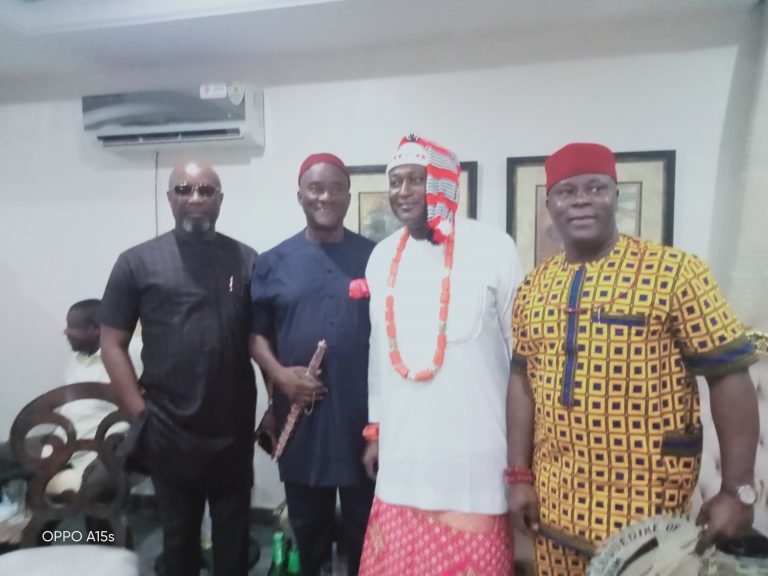 HRH Aguocha, the Grand Patron of Ezenaebiri who made this clarion call at his palace, harped on the need for a peaceful coexistence between the Igbo extraction of other states and their neighbouring communities particularly Rivers State.

In his words, he expressly said:

“And we are pleading that whoever believes in peace and unity of the Igbo nation, will be blessed by the Almighty God. The Igbos should endeavour to believe in others who mean well for them. May God bless us all, in Jesus’ name, Amen. It shall always be forward ever, backward never. he prayed.

In a related development, during an exclusive interview with famousreporters.com, Chief Uche Okwulehie, the Ochi-Obodo 1 of Okwishi, described Ekpe festival as a grand festival of the Igbo Culture, which acts a catalyst for uniting various communities.

The proud son and first Mayor of Umuahia, pointed out that the annual grand festival served as an avenue to bind together the people from various clans.

He further explained that the youths were expected to dance around the community in merriment, while charging the latter to ensure that the celebration at all times be completely devoid of violence and rancor.

Speaking further, he said: “It has a great impact on the society; it’ss a day of merriment, a day that everyone will come out and dance in their cultural outfit, have drinks merry with each other, visit home after home dance and be proud of the culture of Ohuhun Land, it is called the Ekpe ceremony. Every clan has their own day, today is the day for Umuohuru, and we have all gathered in our Eze’s house to merry and enjoy and promote our culture and tradition.

He advised the youths on the importance of education and total abstinence from restiveness of all sorts, saying “my advise for our youths is for them to pay attention, go to school be proud of their achievements, that’s all.”

In his contribution, Bishop Evergreen Chukwu Emeka, of the Resolution Force Ministry aka. Beautiful Gate Assembly advised Christians and indeed Nigerians all over the world to produce evidence of success in facets of their lives.

He described Ekpe ceremony as one of the major factors that activates happiness, gladness and joy.

Speaking further on the correlation between Christianity and the popular Igbo festive, the renowned Bishop said: “well God is the God of Joy, happiness, gladness and their are things that activate it, Ekpe festival is one of the things that activate happiness and joy so what ever that gives Joy or what ever that bring a bidding force to the community God is a part of it, God is in this, so you trying to say that , tell the World that God is a part of Ekpe His a part of it, okay. Cause is a source of joy.”

Answering questions about the offering of sacrifices for the appeasement of the gods in line with the tradition, the Bishop has this to say:

“You know, some people lack knowledge, and they go and produce a doctrine that is not in accordance with the word of God; they produce a doctrine according to their feelings, that’s why the Bible said we should not be led astray with philosophy of men. The Bible says the kingdom of God is characterised by peace, righteousness and the Holiness. So, whatever that springs up happiness in somebody. You know the Bible said a joyful heart. So if you are not joyful you can not turn the water, the bucket that you can use to draw water is joy”

In his remarks, Hon. Ebo Duke Ihekwereme Okorie, a former Commissioner of Abia State Government described Eze Bobby as “one of the best human beings I’ve met in life. Bobby Aguocha is my most trusted person in life.
Advised the people of Ohuhu to ensure, against all odds, a harmoniums relationship with one another.

He stressed that only a peaceful atmosphere could generate progress and success in any environment.

“Whatever happens to them happens to me. Our Ohuhu Community was born and bred by people of outstanding character like late M. I. Okpara, my late father, Ihekwereme, who I’m one peace to generate progress.