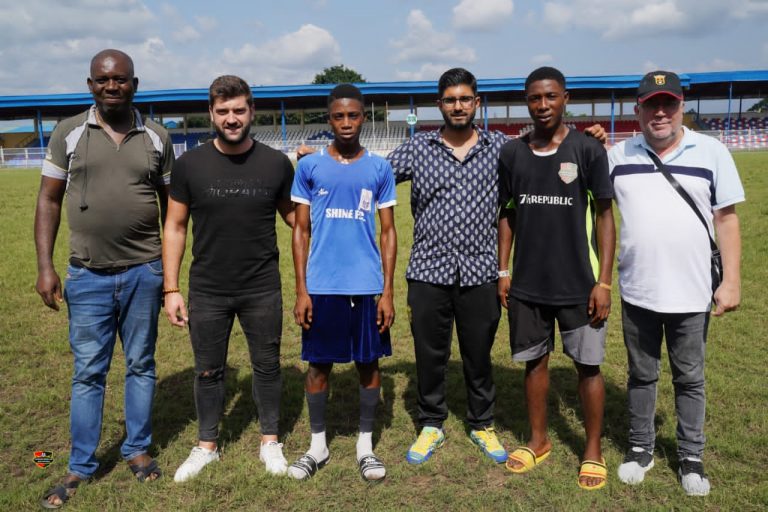 Overwhelmed by the budding talents of footballers in Nigeria, especially in Imo State and coupled with his vision of offering them an opportunity to show case their gifted talents, Mr. Michael Amaefule , the Chairman of Kun Khalifat FC, Owerri has brought three FIFA licensed Scouts to assist in taken the 15 players who were selected as the best of the best among the over 1,000 footballers rigorously screened in Imo State for the past one week.

The three Spanish born International scouts who where in Dan Anyiam Stadium last weekend for the final screening of the selected 48 players were Messrs Clvis Govn, Pako Pepe Daswani and Paio Pepa Trijilio as they have been in the state for the past one week doing the preliminary screening in the various designated centres.

According to Trijillo the leader of the delegation who’s a sports lawyer, football agent registered with Spanish Football Federation as approved by FIFA ” we have seen more than 1,000 players. We have equally seen all kinds of footballers- good, medium and low. It’s from there we selected 48 good players, which was not easy but our criteria and statistics help us alot. Today, which is the final day, we are going to select not more than 15 from the 48 and these are the best of the best.

Honestly, all the 48 players are very very good but unfortunately we can’t take all of them to Europe, am totally impressed with what i have seen with the players, in terms of intensity, height, techniques and hunger for scoring goal. Hunger for ball control and scoring goal is one of the skills we are passionately looking for. However, tactically most of them are totally lost but this can easily be improved upon once we’re in Europe. Am optimistically sure that those who made the final list will most likely survived the screenings in Europe” he assured.

He expressed gratitude to Mr Michael Chukwudi Amaefule, the Chairman of Kun Khalifat FC, Owerri for inviting them to Nigeria noting that Africa is the future of football as a sports and as a business.

According to the FIFA Authorized Scout” I have always have this ambition and vision of helping African players to make it big because there are harvest of football talents in the continent but Lacks the opportunity to maximize their potentials. Africa is so big with lots of suburbs,towns and cities, unfortunately no body goes there because most people in advanced world doesn’t give them a chance” he pointed out.

Adding his voice, Amaefule aka Kun Khaliaft who hails from Obohia in Ahiazu Mbaise LGA of Imo State noted that his mission as a youth who experienced the calamities of poverty is to eradicate poverty among Nigerian youths especially those of them that are gifted in playing football as well as do business in the best possible way.

He pointed out that Imo State Government as represented by Rt Hon. Chyna Iwuanyanwu, the Deputy Speaker Imo House of Assembly and Hon. Dan Ogu, the State Commissioner for Youth and Sports gave their massive support and encouragement towards the international Scouting Tournament.

The Chairman of Kun Khalifat FC further solicited the support and assistance of the state government not in terms of finance but good enabling environment, scholarship to the players and encouragement like now that the 15 players have been selected for the trials in Europe, it’s their expectations that the state government could use their good will as a government and make ease in procuring them visa.

Amaefule expressed satisfaction with the experiences of the International Scouts reiterating his plans to embark on the similar gesture by this November 26 at Abuja informing that his international scouting partners from Belgium, Slovenia and Czech Republics will be there to select another batch of players for international exposure