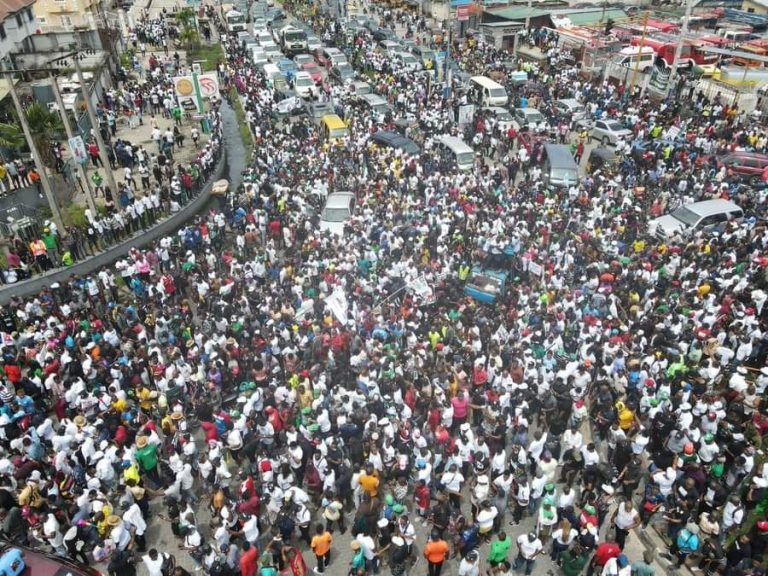 The atmosphere today in Lagos and it’s environs was politically charged and electrified as various groups of supporters showed up at different locations of the ever busy roads in the State.

The party faithfuls alongside other well-meaning Nigerians came out with one common agenda: To totally express their unalloyed support for the presidential party candidate and his vice-presidential counterpart, Mr Peter Obi and Baba-Ahmed Datti, respectively in the 2023 presidential poll.

To really show and demonstrate that the supporters were from the nooks and crannies in the State, each area was asked to mobilise, as well as organise members from their various local support base.

Some of the major support areas include, Ikeja, Badagry, Lekki, Festac, Apapa and Ojota, among others.

The Labour party supporters, comprising mainly youths paid little or no attention to the early morning showers in some parts of Lagos, chanting sonorously OBI-DATTI as they danced to various musical tunes displaying their dancing prowess, yet very conscious of what is at stake for them come, 2023 elections. Top on the agenda as some of the play cards inscriptions, were good governance, rule of law, national security, employment opportunities for youths, growth and sustainable development of the Nigerian economy.

They claimed and were convinced beyond doubt that only Obi among other presidential candidates from other political callings can reasonably offer the needed hope based on his past antecedent as former governor of Anambra State.

The 4million march/rally, which was heavily guarded by police happened without any ugly incident, for which the Nigerian police in the State, should be commended. While commenting on the peaceful conduct of the march, a passerby, who would rather not disclose his identify, said, “these youths mean am oh”.

To say, the least, the zest, and precision with which the youths conducted themselves, while speaking to watchers showed how determined they were to take the opportunity of the political campaigns to deepen what they called the Labour party “Campaign Foot Soldiers”.

Furthermore, one other stimulating aspect of the march/rally was the open display of comradeship among the youths, who despite their different political affiliations, ethnicity, culture, language, and gender shared comestibles within and among themselves under the impressive sunlight that blazed the day, while the march/rally lasted.

This is indeed, is the first of its kind in the history of the Nigeria nation.